$1.26B in VC went to Miami area startups in 1st half. 2H likely will be even stronger

Powered by the red-hot fintech sector, $1.26 billion flowed into South Florida startups across 106 deals in the first half of 2021, according to my research for the just-released eMerge Americas Insights Report. The Miami-Fort Lauderdale metro area also saw a surge in exits, with several companies going public through SPAC deals and a number of homegrown startups announcing acquisitions. 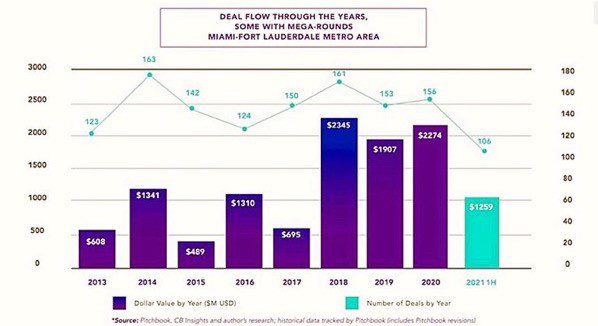 In the first half, we saw the Miami movement bearing fruit in the VC results for the first time, as two of the top 5 deals were new-to-Miami companies: Pipe, in the No. 1 spot with a $250 million raise in Q2, following a $50M raise in Q1,and CRM-focused Introhive, whose $100 million raise ranked third. PayCargo, at No. 2, and then ShipMonk, Nymbus, Papa, Securitize, Novo, Heru and Honorlock round out the top 10 funded companies in the first half. (You can find details on all these rounds on RefreshMiami.com/news)

Q2 showed considerable strength in the Miami-Fort Lauderdale area, with venture capital surging 171% over Q1, according to research based on data from Pitchbook, Crunchbase and CB Insights. If that momentum continues, South Florida could have a record-setting year, and if the first 8 weeks of Q3 are an indication, the region will. Don’t worry, we’ll get to that, but first a few more highlights of 1H:

Now you might be wondering, how’s it going so far in Q3? According to my very preliminary research, at least another $581 million has been invested in the tri-county region in July and August, bringing the running total to $1.84 billion – with nearly four months to go in the year.

Top deals in the past two months were reeled in by Unybrands, Eight Sleep, and Marco, and so far, the size of the average deal is up over the average in the 1st half. With the number of deals in July and August also ahead of the 1H pace, this likely ensures a record in both dollars and deals for the South Florida ecosystem, which saw a run of $6.5 billion flow into companies from 2018 through 2020.

Download the latest edition of eMerge Insights here, which was published in partnership with Knight Foundation and Florida International University, for an overview of the 1H 2021 VC activity, including top deals and trends to watch, spotlights on startups and exits, a look back at the phenomenal first half that Latin America had – and much more.

In addition to providing research reports, hosting speaker events and startup contests, and collaborating with other Miami community builders, eMerge Americas puts on South Florida’s signature tech conference, eMerge Americas, which this year will be April 18-19 at the Miami Beach Convention Center.