5 things to know in #MiamiTech: Another $5B SoftBank bet on LatAm may be in making, a peek at Miami venture results - and more

Two pieces of news crossed my radar that will have a big impact on both the Latin America region and on Miami, as the ecosystems are so intertwined.

The big one: SoftBank Group Corp. plans to invest an additional $5 billion in Latin American companies, doubling its commitment to the region, according to a Bloomberg report based on its sources.

SoftBank, of course, already has a $5 billion fund, announced in 2019 and broken to the Miami community during a 500 Startups event with Shu Nyatta. The $5 billion fund is run out of Miami. Led by SoftBank International CEO Marcelo Claure and run by Managing Partner Shu Nyatta, SoftBank’s team in Miami has been growing fast, and it has been reportedly on the hunt for as much as 100,000 square feet of office space for expansion, according to a media report. In addition to the Latin America Fund, the $100 million SoftBank Opportunity Fund, for investments in startups led by underrepresented founders, and SoftBank’s $100 million Miami initiative are run of Miami.

Now, according to Bloomberg’s undisclosed sources, SoftBank’s board “is close” to approving the new capital allocation. A SoftBank spokesperson said discussions are underway but said they haven’t been finalized.

According to Bloomberg’s sources, whether SoftBank could be expanding its existing fund or starting a SoftBank Latin America Fund 2, it will expand the scope of its investments to taking stakes in public companies.  Find the Bloomberg report here.

SoftBank, the Japanese investment firm, has a long history in Latin America, but the Latin American Fund supercharged investments in the region. Since 2019, SoftBank has been the most active venture player taking part in $18.7 billion of deals,  from Mexican used-car platform Kavak to Brazilian real estate operator Loft, Bloomberg says.

The second piece of related news: CB Insights is out with its State of Venture Report,  and it shows just how powerful the SoftBank Effect has been. According to the report, $2.3 billion was invested in the LatAm region in 2018. In 2019 and 2020, that rose to $5.3 billion each year; in 2020, that was across 526 deals. Remarkably, in the first half of 2021, $9.3 billion across 396 deals has been invested in the region’s companies, nearly double the dollar total of 2020. Another interesting factoid: $7.2 billion of it was invested in Q2. 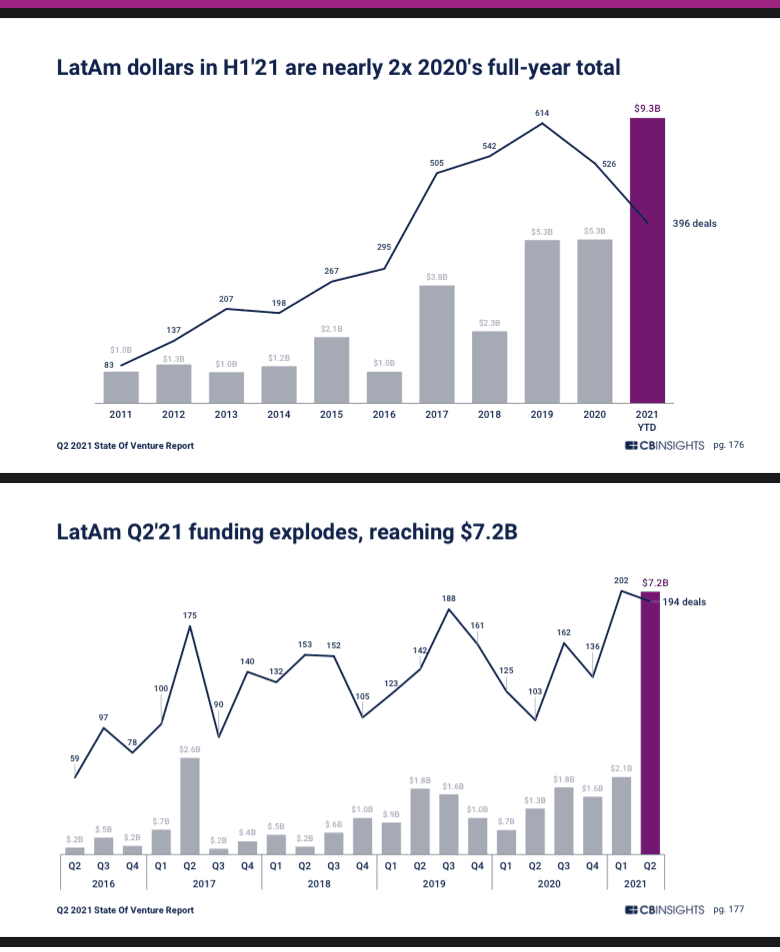 Whatever the final additional capital allocation may be from SoftBank, SoftBank no doubt will continue to be a huge player in LatAm. with a large part of its operations directed from Miami.  Amd with the Miami metro area being an attractive place for LatAm startups to launch US operations and for US startups to expand to LatAm, all of this is good for Miami.

Speaking of the CB Insights, its State of Venture Report found that companies in the Miami-Fort Lauderdale metro area hauled in $1.03 billion in venture capital in the first half, with $711 million of that coming in Q2. This puts the Miami area on track for a potential record year, and continuing the trends of the past three years in which $6.5 billion in venture dollars fueled Miami-Fort Lauderdale metro area  companies.

Pipe’s $250 million round was the largest deal in the second quarter, followed by PayCargo ($125 million), Redzone ($68 million); Papa ($60 million) and Heru ($30 million), according to the State of Venture Report. Miami data was not broken out in CB Insights Q1 report, big deals included were ShipMonk ($65 million); Nymbus ($53 million) and Pipe ($50 million). Pipe’s round was also the largest of the first half. 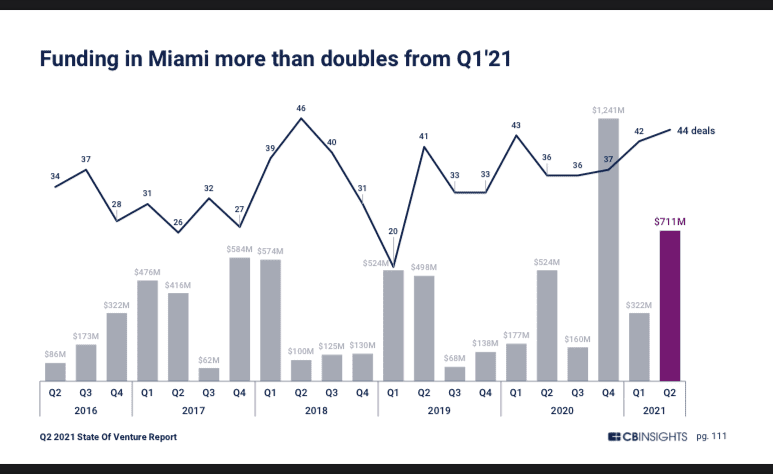 I call this an early look because I will be again compiling the mid-year report for eMerge Americas over the next couple of weeks. I will be looking much more deeply at the Miami metro data for trends in sectors, stages. comparisons and pivotal moments  (download the 2020 report here) to try to present a complete picture of the Florida and South Florida venture landscape, which I have been tracking as a business journalist since 2012.  My total is running a little higher than CB Insights because it also includes angel deals. Stay tuned!

To be sure, nationally, the venture pie has gotten bigger and the Big 3 are still very much at the top. According to CB Insights, the U.S reeled in nearly $139 billion in the first half of the year, nearly the total of the entire record-setting year of 2020 . Silicon Valley, Boston and New York  account for about $87 billion or 63% of the venture capital pie in the first half of 2021.  Miami’s tiny but feisty slice represents 0.7%. 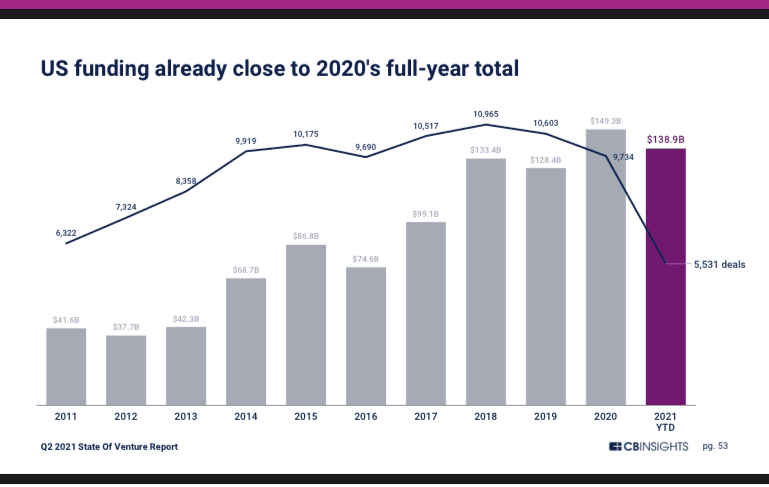 Moishe Mana, the billionaire developer, bought a parking lot at 49 NW First Street, across from the Miami-Dade County Courthouse, and a single-story building with a handful of eateries, in a $12.4 million sale, according to the Miami Herald.

Six years ago, Mana started acquiring lots downtown, mostly along Flagler. He is the district’s largest landowner with a total of 60 buildings and vacant lots, according to the Herald. He has announced plans for a tech hub.

On the heels of its $12 million Series A funding round last month, Loupe,  an e-commerce streaming platform for sports cards collectors, has now leased a 3,658-square foot facility at 286 NW 26th St. in Wynwood where the starttup will open a hobby shop, showroom and studio. Sccording to the South Florida Business Journal, the company’s new headquarters is located near the entrance of the popular attraction and event space, Wynwood Walls.

Loupe was founded by Eric Doty, a collector since he was a child. Doty, Loupe’s CEO,  moved the company to the Miami area from Los Angeles in October. The startup also launched the service in October as well, and Crunchbase reported today that the startup is growing by 50% month over month in total sales and is facilitating millions of sales every month.

Endeavor Miami is partnering with Dell and host the Endeavor Pitch Competition powered by Dell on Wednesday, July 28.  The virtual competition will feature ten South Florida-based companies. Two winners will be awarded prizes in equipment and services provided by Dell.

Dell for Entrepreneurs will be hosting 8 pitch competitions during the summer, in collaboration with various partners (including Endeavor), to award up-and-coming startups across the United States. The top two companies of each competition will participate in a final pitch competition hosted by Dell on September 15th, competing for $15K, $10K and $5K in cash prizes.

Slow holiday week? In #MiamiTech, not so much! The month’s news and spotlights (so far!) on Refresh: 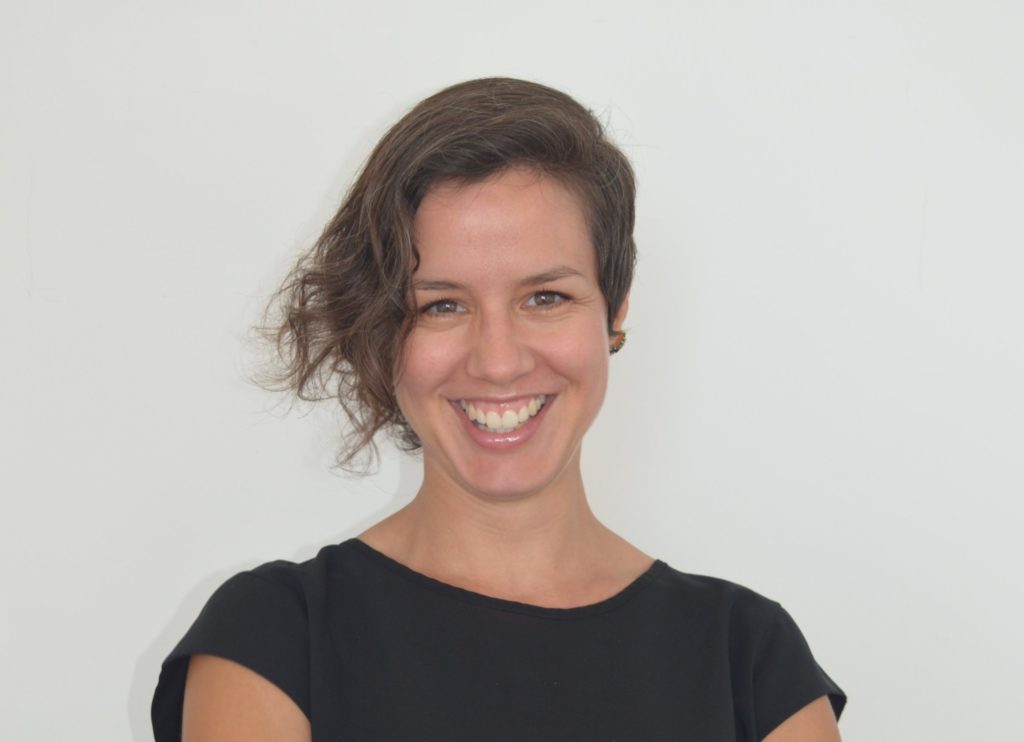 FacebookTweetPinLinkedInEmail  Summer slowdown? Not a chance. Here’s a sampling of new opportunities cooking up for startups as well as some tech news. 1 The Startup…