5 things to know in #MiamiTech: South Florida startups draw $2.27B in venture capital in 2020, eMerge coming back next year, and more

A decade ago, the Miami-Fort Lauderdale metro area drew about $220 million in venture capital. Now 10X that.

In 2020, despite the global pandemic rocking our world, South Florida startups drew in $2.27 billion in venture capital, led by the $700 million SoftBank-led raise for REEF Technology, according to eMerge Insights, which features an in-depth analysis of the Miami Tech ecosystem that I authored. What’s more, 2020 marked the end of a three-year run that drew in $6.5 billion to the ecosystem, eclipsing the eight previous years combined by more than a billion dollars.

The report also includes a spotlight on  Latin America, which saw a near-record $4.1 billion in investment in startups across the region in 2020, creating a handful of new unicorns.  Amid the pandemic, VC was down only about 10% from 2019’s record, which was stoked by SoftBank’s big bet on LatAm with its $5 billion Latin America Fund launched in 2019. It’s all way up from five years ago, when the region drew just $500 million. By the way, 2021 is off to a brisk start.  Just last week, Brazil’s proptech startup Loft raised another $425 million last week, Brazil’s Nuvenshop (think Shopify) raised $90 million while Argentina’s Digital House, a tech talent solution, brought in $50 million. Earlier this year, Brazilian fintech Nubank raised $400 million; its valuation is now $25 billion. SoftBank and Dynamo led a $190 million investment in Brazilian  home goods e-commerce startup Madieramadeira. Brazilian logistics unicorn Loggi raised $205 million, and grocery delivery startup Josto, of Mexico, picked up $65 million. Argentina’s Digitial Brazilian mobile payments startup Recargapay raised $70 million, co-led by Miami-based Fuel VC. Recargapay’s founder and CEO, Rodrigo Teijeiro, lives in Miami too. Looks like it will be another big year for the LatAm region.

Find out more about 2020 in venture capital, including spotlights on ShipMonk, Carevive and Mayor Francis Suarez as well as ecosystem highlights   in the report here. 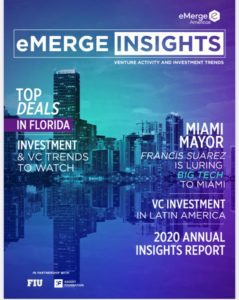 In light of safety precautions imposed in Miami-Dade County to continue curbing the spread of COVID-19, eMerge Americas will not be hosted this April 26-27, as previously scheduled, but will return in March 2022. Last year’s conference was also cancelled due to the pandemic. “It’s our honor and responsibility to continue delivering the eMerge Americas experience while we await necessary accommodations for a safe, dynamic, in-person experience that everyone deserves,” said eMerge Americas President Melissa Medina.

In the meantime, eMerge is expanding programming leading up to the conference. It will include master classes, office hours, virtual panels, virtual startup pitch competitions, and small in-person convenings following social distancing guidelines, the organization said.

“At the forefront of building a thriving tech and entrepreneurial ecosystem in South Florida, eMerge Americas is now unveiling a new programming calendar to capitalize on recent momentum, which expands the core program of the Startup Showcase and our Investors Summit by focusing on venture capital, entrepreneurship, talent recruitment, diversity and inclusion,” said Felice Gorordo, CEO of eMerge Americas.

LDH Growth Corp I, a Miami-based SPAC led by SoftBank Group International CEO Marcel Claure, raised $230 million in an initial public offering. LDH Growth is trading on the on the Nasdaq under the symbol “LDHAU.”

According to new research from Citrix Systems, hybrid work is here to stay, and in this new world of work, delivering a unified, secure, and simplified work experience will be key to success. Citrix teamed with OnePoll to survey 7,250 employees in 12 countries and assess how their attitudes and expectations on work have changed since the crisis began. And one finding that came through loud and clear: There’s no going back.

Still, two-thirds of employees polled say they are working the same or more hours. 41 percent of employees cited distractions in their home environment (children, pets, etc.), and 28 percent say they lack appropriate technologies and applications to get work done. 36 percent feel isolated and out of touch with colleagues.

Renaissance Learning completed its acquisition of Dania Beach-based edtech startup Nearpod. Terms of the deal were not disclosed, but it’s been reported to have been about a $650 million acquisition.

The company has more than 300 employees and plans to grow its team following its acquisition, said Nearpod CEO Pep Carrera told the South Florida Business Journal. Nearpod and Renaissance will operate “fairly independently” through 2021, he said.