6 things to know in #MiamiTech: Elon Musk’s tunnel vision moves ahead; robots on way; crypto and REEF news plus more

Bloomberg reported that the deadline for other companies to submit competing proposals passed last week (two bids reportedly were rejected for not meeting qualifications). That means Boring Co. can start exclusive negotiations with city officials.

“Along with negotiating an agreement with Boring, there will be a significant amount of technical and engineering and regulatory work that will need to be done,” a city spokesman told Bloomberg. She would not speculate on a timeline.

Dubbed the Las Olas Loop, the proposed tunnels would extend about 2.5 miles each way from downtown to the beach. Like its tunnels in Las Vegas, passengers would ride in dedicated Teslas, which would be driverless once the technology advance. Miami Mayor Francis Suarez has also been talking to Boring about a potential tunnel project in Miami.

Financial details have not been released, but in an NPR  Q&A, Fort Lauderdale Mayor Dean Trantalis estimated the project could cost $90 million to $100 million.  Read more in Bloomberg here  and in earlier coverage on Refresh Miami here.

Kiwibot, a robotic delivery service company that has completed over 150,000 food deliveries, announced it is expanding its operations to Miami, as well as San Jose, Pittsburgh and Detroit, due to a partnership with the Knight Foundation as part of the foundation’s people-centered, smart cities initiatives.

Each of the four cities will be given 10 robots, making deliveries more efficient and cost-effective for the pilot use cases. The pilot use cases chosen range from small local business deliveries, to community kitchens working with vulnerable populations, to increase access to food, medication, and other goods.

These pilots contribute to Kiwibot’s aspirations to be the world’s largest robotic fleet and a self-sustainable public service by mapping areas and collecting infrastructure data, helping US cities become more accessible and safer as they spend up to $40 billion over 30 years repairing curbs, ramps, and sidewalks to prevent fatalities. Kiwibot got its start shuttling burritos and snacks to students on the University of California-Berkeley campus. 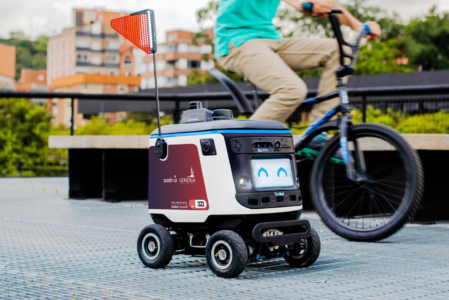 Another crypto conference in the plans

The crypto calendar is filling up.

Organizers announced that the inaugural CryptoWorldCon, organized by Moonwalker USA, will be held at the  James L. Knight Center in downtown Miami on April 1-2 and will include industry experts, entrepreneurs and investors in the emerging cryptocurrency, blockchain and mining technologies. According to South Florida Business Journal, former stockbroker and author of “The Wolf of Wall Street,” will be a VIP guest speaker. Find out more here.

After drawing 12,000 to Wynwood in  June, Bitcoin 2022 is returning to the Miami area April 4-6. eMerge Americas, which is April 18-19 and will kick off Miami Tech Week, also has said it will have a focus on crypto and blockchain innovation, as well as relevant verticals such as fintech and healthtech. Those who can’t get enough crypto knowledge and networking can apparently also attend the North American Bitcoin Conference in January and The Blockchain Event in February without leaving South Florida.

REEF growing its footprint, both in Brickell and Davie

The Miami-based unicorn transforms parking lots into neighborhood delivery hubs for local businesses. Founded in 2013, it currently operates 5,000 locations and has a team of 18,000 people nationwide, with at least 2,400 in South Florida.

REEF has been in the news a lot lately. REEF recently announced it plans to hire 1,000 workers in the Miami area over the next three years to support its operations as it grows its footprint. The same week Archer announced it was partnering with REEF to bring air taxis to roofs in REEF’s parking locations in Miami in 2024. (Read a Refresh Q&A with CEO Ari Ojalvo here.)  What’s more, the Miami Herald reported that Reef recently leased  28,205 square foot space at WeWork Brickell City Centre, reserving 543 desks for REEF employees. The WeWork partnership also includes exclusive food delivery service provided by REEF’s neighborhood hubs.

Miami-based Condos.com, the recently launched global online marketplace of new and pre-construction condominiums, has partnered with BitPay, the world’s largest provider of Bitcoin and cryptocurrency payment services. Condos.com is the first online real estate marketplace to accept cryptocurrency through BitPay’s 11 supported coins as payment for both deposits and its industry-leading rebates, the company said. “Through Condos.com, our mission is to become pioneers in the real estate industry by offering seamless and simplified luxury condo transactions, and we could not achieve this without venturing into the cryptocurrency space,” said Neel Kawale, CEO of Condos.com.

Through Condos.com’s payment processing partnership with BitPay, consumers can browse the marketplace’s collection of new and pre-construction condominiums and make a deposit using any of the available cryptocurrencies BitPay supports, regardless if the development accepts cryptocurrency.

Calling all LATAM/Caribbean founders! In honor of Hispanic Heritage Month, Pitch Night MIA has been designed with one idea in mind: Collaboration breeds innovation. Learn from startups working on the next wave of technology and the investors who evaluate them. The program at 6-7:30 pm Sept. 16 at The LAB Miami will include a pre-pitch mixer, pitches with Q&A from judges, awards and post-pitch socializing. Apply to pitch here. Register for the event  here.