More than two-thirds of the Earth’s surface is covered by ocean water. It represents both the vastness of our blue planet and how we are all connected by this abundant natural resource. This same common link highlights the global impact of plastic waste, as plastic dumped from one corner of the earth can travel entire oceans and wash up on the delicate coastal ecosystems on which many communities depend to survive and prosper.

Acknowledging the presence of this sleeping giant, two South Floridians founded and grew a company that focuses on global impact through local community-driven solutions supported by ocean cleanup innovations around the world – 4Ocean.

4Ocean is a public benefit corporation with the mission of ending the ocean’s plastic crisis. Florida natives Alex Schulze and Andrew Cooper started the company after traveling to Bali on a surfing trip in 2015 and discovering the impact the world’s plastic pollution crisis had on Bali’s local economy, which was a microcosm of coastal communities around the world.

Upon returning to their Florida homeland, they founded 4Ocean in Boca Raton, which has now collected over 16 million pounds of plastic by combining local community engagement and applied technology strategies funded by revenue from sustainable consumer products like clothing, tote bags, and their trademark jewelry. 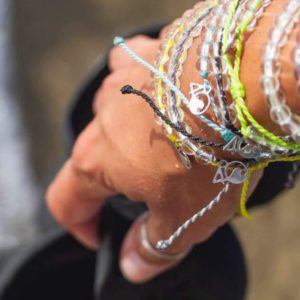 “Ocean plastic cleanup is not easy,” says Tim Binder, Vice President of Brand Marketing at 4Ocean, as he highlights the innate challenges of ocean cleanup at global scale.  “No matter where you are in the world, it requires a different strategy, different equipment, and the right tools to do it as efficiently as possible.”

4Ocean’s approach starts with connecting to local communities in cleanup sites of interest, which includes building relationships with local governments and organizations who are already concerned with plastic pollution in their communities.

Once opportunities are identified and paired with respective solutions, 4Ocean implements what they call the “Boats, Boots, and Booms” approach.

First they source fleets of boats that are native to or commonly used in the local regions. For example, in Indonesia locals use a “Jukung”, designed to handle the bays and the inlets around their complex island networks. In Guatemala, locals use motorized “Pangas” to easily travel along the coastline and into Rio Motagua.

Once the boats are sourced and outfitted, they hire the “Boots”, people who will pick up the trash from the beaches, rivers, and oceans. Boots are often from local communities who are also impacted by the local pollution which often includes boat operators who know the landscape and artisans who transform some of the waste into 4Ocean branded products,

Once the Boats and Boots are enlisted, then 4Ocean implements the Booms systems, which are barriers along bodies of water roped at an angle to prevent river plastic from getting lost into the ocean, enabling easy cleanup by Boots. They are commonly used in oil spills but 4Ocean has put them to use in sites where pollution reaches the oceans due to excess dumping from urban centers or heavy rain dragging plastics.

Alongside 4Ocean’s “Boats, Boots, and Booms” framework for community engagement, they also have a demonstrated track record of pushing new technologies into the field to scale the trash cleanup process.

Among some of their most prominent solutions is the mobile skimmer, a piece of technology that looks like a golf cart on the water with hydraulic arms that drop down into the water and guide the pollution into its belly, before its taken into a container sack for later processing. Another solution in a similar vein is the harbor skimmer, a large box that sits near a dock, marina, or harbor, that collects trash as it floats around the water. Crew members of the marina can then simply empty the trash with the touch of a  button.

While the skimmers are fantastic cleanup utilities, they might not come close to the degree of innovation when compared to their most recent piece of cutting edge technology: the BeBot.

4Ocean teamed up with Poralu Marine, a global leader in marine-grade technologies, on the launch of their state-of-the-art BeBot, a beach cleaning robot designed to recover coastal plastic debris. The BeBot can be piloted remotely from over 900 feet away and picks up debris that is over 1 cm x 1cm (or 0.39 inches by 0.39 inches, approximately) in size. With the capacity to clean up to 3,000 square meters (about 32,000 square feet, equivalent to nearly 7 basketball courts) of beach surface per hour, it is up to 30 times more effective than collecting trash by hand. 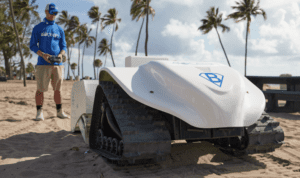 The Bebot will be tested in Florida before implementation in 4Ocean’s Hawaii and other beaches in the rest of the country, hauling with it the hope of a more sustainable future with clean beaches and cleaner oceans.

The Global Movement for Ocean Cleanups

Though climate change and ocean pollution are overwhelming problems at scale, Binder calls on all global citizens to “stay optimistic” and join the global movement for a clean earth by making small decisions in everyday life that will lead to a reduced plastic footprint and actively push back on unsustainable policies that only encourage continued pollution.

He already sees great shifts taking place adding weight to his optimism, pointing to industries like footwear and apparel brands that are launching more sustainable products every day, and sustainability as a growing priority of a new generation. “That’s what’s  great about this whole movement,” Binder said. “Everyone wants to help solve it.” 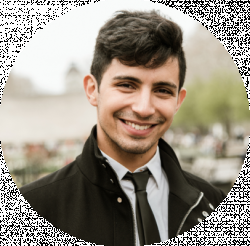 Livio Zanardo
Livio A. Zanardo is a Venezuelan-born, Miami-grown freelancer, technologist and creative. He focuses on technology for sustainable impact through both his freelance work and for Code For South Florida as a local ambassador of Public Interest Technology. When he is not engaging with the community, he's probably playing Super Smash Brothers or practicing axe kicks at the park on a tree. You can reach him at [email protected]