TESTD, a startup developing a blockchain-based Covid testing platform, has just announced plans to move its headquarters to Miami this summer.

Founder and CEO Nicholus Andrews said he is excited to take full advantage of Miami’s vibrant startup scene. “I look forward to seeing TESTD grow alongside the Miami tech ecosystem.”

Miami Mayor Francis Suarez also applauded the news: “TESTD is a Black-owned tech company that provides testing services as software as well as a comprehensive testing solution that is well positioned to help companies in the COVID and post-COVID world. We look forward to them relocating their headquarters and maintaining this Miami momentum.”

TESTD offers a platform that streamlines the entire process of testing for Covid. Users are able to quickly and securely book appointments. It then only takes users around 19 seconds on average to check in to an appointment. Finally, test results are relayed directly to the patient as soon as they are ready.

The experience for testing providers – the startup’s core client – is just as seamless. All of the information related to tests taken can be monitored through a centralized backend system. This data can be analyzed and shared by healthcare authorities if needed.

Underpinning the platform is cutting-edge blockchain technology. The use of blockchain is innovative in this context because it provides patients with privacy while offering granular, anonymized insights to providers – a notoriously difficult balance to strike in the highly-regulated healthcare space.

The healthtech startup was founded last April and is currently based in Fort Lauderdale’s FATVillage. It has bootstrapped its way to 22 employees, with the exception of a modest friends and family round last December.

TESTD is already a trusted testing partner for a diverse set of large-scale testing operations, including the government-run Covid testing facility in Hialeah and select locations of hotel chains Hilton and Sheraton. While the startup currently focuses on testing for Covid, the platform can be also applied to other testing initiatives in a post-Covid context. 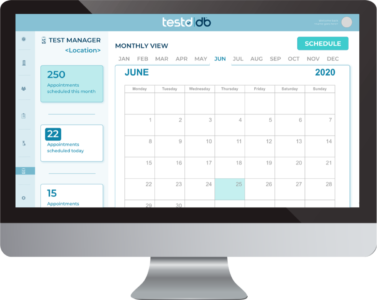 Andrews has been in technology since the late 1990s, primarily working with clusters of supercomputers. “I started exploring blockchain technology in 2012,” said Andrews (pictured above). He hasn’t looked back since: “Blockchain represents the next evolution of databases. Databases being decentralized is a wave that is not going to be stopped.”

Alan Goodman, TESTD’s Head of Strategy, Communications, and Marketing, bonded with Andrews over a mutual interest in blockchain technology. His first venture with Andrews was to create a course on blockchain, which was taught to students in Ghana. Goodman and Andrews noted that while blockchain is well known for powering cryptocurrencies like Bitcoin, the technology itself is a far cry from what they describe as “magic internet money.”

Goodman, a media executive who was part of the team that founded MTV, sees a direct parallel between the impetus to start MTV and the blockchain revolution. He said that MTV was all about “giving people control over their own media – giving them an outlet to share their voice and express themselves.” For Goodman, blockchain is “an extension of that – giving people control over their identity, their finances, and their own medical data.”

TESTD plans to keep busy over the next few months. On top of the Miami migration, Andrews said that they plan to continue developing TESTD Labs, a separate company that provides the tests that are then managed through TESTD Inc.’s software ecosystem.

Additionally, this summer TESTD plans to kick off fundraising efforts to enable further development of the platform.

Andrews hopes that Miami can become a hub for healthtech, a sector seen by many community leaders as a potential area of strength for the region. “Healthtech is big on the West Coast, but in my opinion it’s kind of overlooked on the East Coast,” Andrews said.

Photo at top of post is TESTD Founder and CEO Nicholus Andrews. Photos provided by TESTD