David Mullings represents the new wave of entrepreneurs planting their roots in the 305. With the renewed attention on #MiamiTech, the Jamaican-born investor experimented living in Miami back in November 2020 and ultimately moved his business HQ to Brickell in January 2021.

Now he’s planted his boots and is ready to shake things up through his private investment firm, Blue Mahoe Capital. This summer Blue Mahoe aims to launch a $100 million impact fund focused on supporting women, black, indigenous, and other entrepreneurs from underrepresented communities in the U.S and Caribbean.

Mullings is no stranger to Miami. He immigrated to the area in 1996, graduated from the University of Miami (‘03) with an MBA in marketing and international business at age 22; and had lived in the county for 11 years before moving to Orlando in 2007. After graduating from the University of Miami, Mullings worked in marketing and product development at the Jamaica National Building  Society and later founded the Keystone Augusta Group, a diversified holdings company. Before launching Blue Mahoe, Mullings joined black-owned hedge fund Left Brain Capital as an Investor Relations Specialist and played a key role in setting up their presence in Miami.

David Mullings is on a mission.

Blue Mahoe Capital maintains an active portfolio of investments in the U.S. and Jamaica. Most recently the company co-invested in a $10 million real estate deal in Miami and agreed to acquire stakes in Sprint Financial, a Jamaica-based microfinance company. Mullings is Chairman and CEO.

A recent analysis from Crunchbase has highlighted a critical gap in funding for minority founders. In 2020, less than 1% of venture capital funding went to black founders; while women founders received 27% less funding compared to the previous year. Mullings is on a mission to close those gaps.

“We need to create wealth for a significant number of people who look like me, who sounds like me, and who can relate to my story,” Mullings said. “Money always has an impact. It’s just (about) deciding if it is going to be positive or negative.”

At a simple glance, you can see Blue Mahoe actively models Mullings’ ambitions for diversity and representation in the startup and finance industry. The team has an 80% female staff – and 6 out of its 8 board members are minorities.

With this talented team, Mullings is excited to back talented entrepreneurs solving pressing global challenges such as financial literacy in underserved communities or even climate change.

“Ultimately, I think we’re going to have some exciting companies coming into this region that solve bigger world problems,” he expressed. “Especially as I think about climate change, for example. That’s the next big existential threat.”

On building a bridge to the Caribbean, Mullings’ big ambition is shining a spotlight on the economic potential of countries in the Caribbean. He cautioned that while the English speaking Caribbean can be easily overlooked (in Miami), many of the countries in the Caribbean and Latin America have shared experiences as an emerging market.  Jamaica, for instance, is just a mere 558 miles from Miami and is the third-largest English-speaking country in the Americas. Jamaica has ranked 6th globally in the World Bank Starting a Business indicator, yet the region has still primarily flown under the radar as a thriving economic hub. “Jamaica is not just sun, sea, and sand,” lamented Mullings. “For most when they visit, they don’t leave resorts. So they miss what’s happening. The Jamaica Stock Exchange has been one of the top-performing global exchanges and Jamaica has demonstrated fiscal discipline even with impacts of COVID.”

Caribbean natives represent one of the largest shares of Black-immigrants living in Miami-Dade County. According to a 2015 study by PEW Research Center, 1 in 3 Black residents are from the Caribbean.

Mullings beamed as he reflected on why he ultimately chose to continue building in Miami. “Miami has proven that you don’t need to have gone to Stanford and Harvard to build quality tech companies.” He continued by celebrating Miami’s diversity: “If you look at the founders of startups in Miami, you get to see far more people who are black and brown, and it’s not because we got a tan on the beach.” 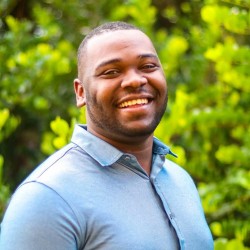 Ja'dan Johnson
I'm an entrepreneur and creative with an extensive background in media and corporate communications. I write stories covering tech, startups, and awesome Gen Z talents in South Florida. I love amplifying the stories of talent from traditionally underrepresented communities. Let's connect: Follow me on Twitter: @jdanjohnson | Share your stories at chat@jadanjohnson.com.