When you order something to eat via Uber Eats or any of the other food delivery services, you can track that $14.99 meal in real-time and even get notifications about when the food was dropped off at your door. But in the international logistics industry – where shipments can be worth millions of dollars – shippers just send it off, and the client waits patiently for the delivery with little knowledge of any hiccups that may happen along the way. When you consider the monetary value of the two situations, the lack of transparency within the international freight forwarding industry starts to sound a little outlandish – and outdated. That’s the opportunity that Cargologik, a Miami-based logistics startup that offers a web-based freight collaboration platform that helps independent freight forwarders/brokers work together, stay-in sync, and improve operations with its small shippers, is capitalizing on.

The company launched to the public in September of 2020.

“While you can know where your dog’s food is via Amazon, if you’re shipping $1 million in cargo, you don’t get that clarity,” said Miles Varghese, co-founder and CEO of Cargologik. “What we’re providing is not only a way to improve communication but also to stay on top of their shipments. It’s like an always-on assistant,” Varghese added.

The application reduces all the “Hey, where’s my cargo?” messaging that often slows down the whole process, says the company’s website.

But there’s more to it than just communication and tracking. In fact, Cargologik provides an out-of-the-box solution for freight forwarding in general.

“Hey, I need to move a container from Shanghai to Miami, and while that sounds pretty simple, it’s actually a really painful process because there are so many forms that are required,” said Varghese.

When someone ships a container, there are various forms that need to be filed that include a description of the cargo – to make sure the contents don’t break any international smuggling laws such as ivory or shark fins, for example. Then there’s the insurance coverage and information about taxes, followed by several other forms that add to the pile of paperwork. With Cargologik, all the forms are provided in the company’s handy dashboard, so there are no emails with attached pdfs to deal with.

Cargologik targets independent, small to medium-sized international freight forwarders, who have up to more than 100 employees and are moving roughly 2,000 shipments per month. With just 4 full-time employees, the 7-month-old company already has more than 120 companies from around the world as clients.

Varghese is a startup veteran who has been part of two startups with exits. His roles have been mostly in sales and business development and he describes himself as a salesperson. He holds an undergraduate degree in business from the University of Miami and after several business jobs, he ventured into the startup world in Miami where he first worked at Live Ninja followed by Octopi, another logistics startup that was acquired. He was then hired by Cargologik to lead the company, which was started by Luis Trujillo Jr. with $500K in funding by his family, who owns Grupo Holco – a leader in freight forwarding in Ecuador. Cargologik was started to solve a lot of the pain points that the family business faced.

The company is in the process of raising its next round, and Varghese said he learned to pitch from Will Weinraub, the founder and CEO of Live Ninja. “Will is an excellent pitcher, and I learned how to pitch by watching him,” Varghese added.

Varghese believes vehemently in Cargologik because he sees the value the company brings. “It’s a DHL tracking number meets an Amazon tracking timeline,” he said. 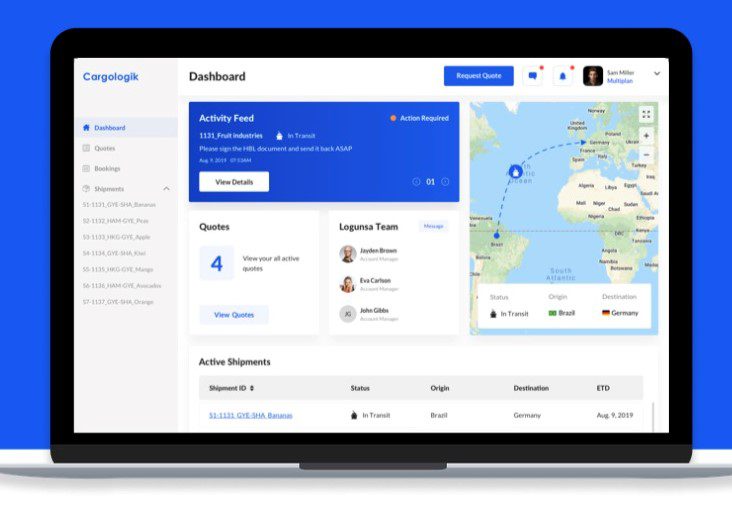 Marcella McCarthy
I’m a freelance writer, editor, and content marketer specializing in tech and health. I hold a master’s in journalism focused on health & science reporting from Northwestern University and am also a regular health contributor to the Miami Herald. My experience in tech is a result of a 2-year hiatus when I was the CEO and co-founder of Skillied, a Miami-based startup that offered a SaaS product and marketplace for in-person classes in the community. I enjoy telling engaging stories about people, companies, and organizations in Miami and beyond. Reach me at