Cutting the cord on your TV subscription? MyBundle.TV can help you find the best deal on a streaming platform

The Great Unbundling is upon us. Many consumers are no longer willing to fork over more than $200 on average every month for cable television. In 2020 alone, more than 7 million American households cut the cord on their traditional TV package. Despite this shift away from legacy media providers, Americans are still consuming a staggering amount of content: more than 13 hours a day.

Jason Cohen, the Hollywood-based co-founder and CEO of MyBundle.TV, is acting on those trends and helping consumers figure out how to get the content they crave at the best price.

When he worked as a portfolio manager at a New York hedge fund, Cohen noticed that consumers were trending towards digital content over legacy providers. “There was lots of change happening, and out of that came a lot of confusion,” he told Refresh Miami.

That’s when Cohen decided he would take advantage of this “once in a lifetime opportunity to build something special” and help people cut the cord. “We built an algorithm to help people figure this out,” he explained. Users answer a string of questions about their viewing habits such as which TV stations they currently watch, whether sports is important, and which streaming services they already have. MyBundle.TV uses this data to suggest the most price efficient digital platforms.

Since the launch of this cord-cutting tool, MyBundle.TV has developed other free B2C tools to help consumers take control of their media diet. One of these tools helps eliminate endless scrolling by helping users find content they might like on streaming services they already have. Another is a tool that lets users share a list of shows to watch with their friends.

Cohen said that the startup is also in the process of launching a subscription management platform. Users would be able to sign up for platforms through MyBundle.TV and pay for them all in one bill. “We’ve built the technology,” said Cohen, “and now it’s about bringing streamers on board.”

MyBundle.TV is also making waves in the B2B space. It partners with broadband providers to offer television packages with their internet subscriptions. “For a broadband company, new customers are worth thousands of dollars each,” Cohen explained. “When broadband companies pitch themselves to customers, they can say they have a TV option through MyBundle.TV. That helps them win new customers.”

According to Cohen, MyBundle.TV is currently partnered with broadband companies that cumulatively have around 5.7 million customers, and is in late-stage talks with partners that have an additional 3.2 million customers.

Earlier this year, MyBundle.TV took part in Endeavor’s four-month ScaleUp program, which Cohen called “a great experience.” This included mentorship from top local entrepreneurs, as well as introductions to investors in the Endeavor Investor Network. 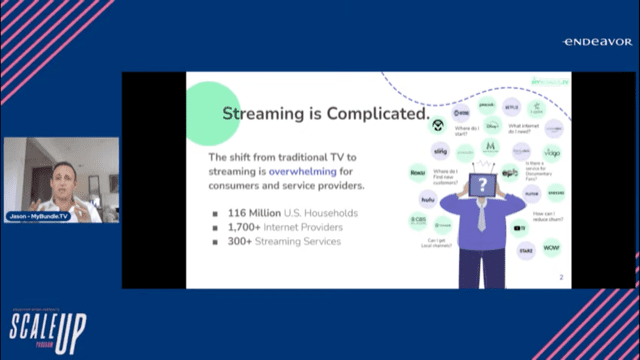 The startup raised $1 million in February 2020. Cohen reports that since then they have raised an additional $1.2 million. Next up for the startup is a $3 million funding round.

“We’re very interested in having funding conversations with Florida-based VCs and individual investors who know the space and understand the problem,” Cohen said. “We’re looking for investors that have experience in marketplaces and media platforms,” since consumer tools are just one part of MyBundle.TV’s business model.

Cohen’s six full-time employees are currently working remotely, with a view to move to a hybrid model soon. Cohen is “incredibly bullish on the South Florida tech ecosystem,” and the MyBundle.TV team is looking for office space in South Florida.

As for the company’s future developments? “I’m really excited about the broadband providers we’re talking to,” Cohen said, noting that new deals this year could double the number of households in their partners’ ecosystem. On the consumer side, he said MyBundle.TV plans to “build out some more social tools, make great TV recommendations, help consumers keep track of the shows they’re watching, and manage their subscriptions.”