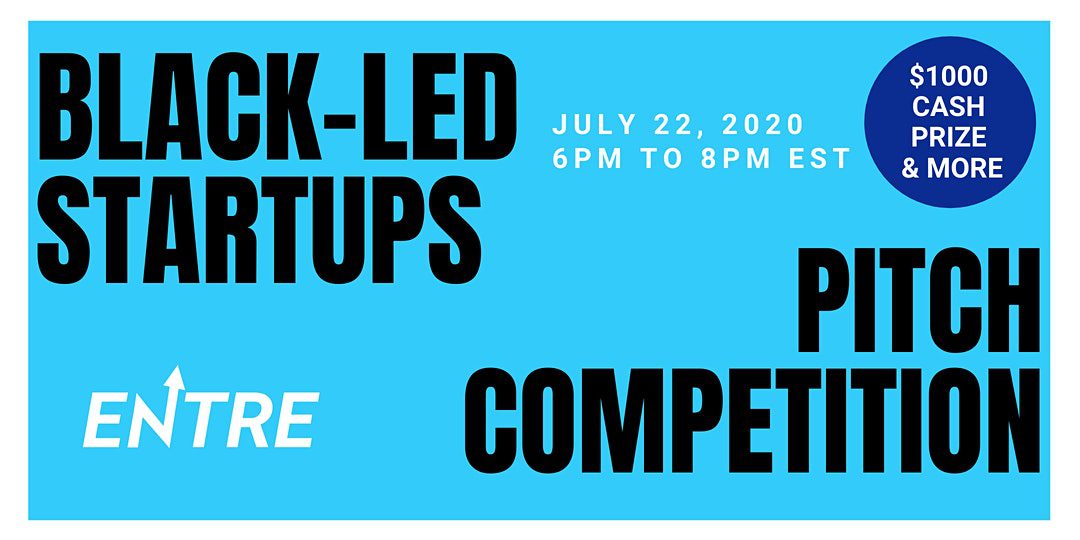 This is an Online Event via Zoom.

Join Entre virtually for our Black-led Startups Pitch Competition. 6 startups will pitch to a panel of investor judges and hundreds of entrepreneurs.

Apply here in this google form to be considered to pitch at this competition. Application deadline will be July 15, 2020.

Prizes will be presented to the winners of this Pitch Competition.

Brandon Andrews is co-founder of Gauge; an AI-driven mobile market research platform connecting brands to consumers and influencers to identify opportunities and avoid mistakes. As Senior Consultant at Values Partnerships he leads the company & work on technology and entrepreneurship, including leading a nationwide casting tour focused on bringing more diverse ideas and voices to ABC’s, Shark Tank and building inclusive ecosystems. Named a Global Innovation Fellow by the U.S. Department of State, he has traveled the world speaking and hosting events on entrepreneurship and innovation.

Committed to bringing resources to diverse entrepreneurs, he started The Investment event series to educate entrepreneurs and investors of color. In addition to working with entrepreneurs Brandon has helped lead nationwide engagement campaigns including If Beale Street Could Talk (2018), Fences (2016), ROOTS (2016), and Concussion (2015). In 2018, he managed the #TechtoWealth Tour with DJ Young Guru. Designed to get 10K people of color coding, #TechtoWealth brought tech events to WeWork locations in the final six OTRII Tour cities + BET Hip Hop Awards with $1M in coding scholarships available from Opportunity Hub and Flatiron School.

He worked with NBCUniversal Cable Entertainment to refresh their Erase The Hate campaign, including building the first accelerator for organizations fighting hate. In 2015, he worked with A+E Networks, iHeartMedia, and the United Way to develop the Shining A Light Concert for Progress on Race in America, Shining a Light Fund, and Conversations on Race in America documentary.

Previously, Brandon empowered public affairs, technology, and real estate clients at MWWPR. He spent 5 years in the U.S. Senate where he handled technology, small business, and defense policy. He is Chairman of the DC Commission on National and Community Service. A former fashion model, he serves on the DC Commission on Fashion, Arts, and Events and works with fashion/beauty entrepreneurs. He provides commentary on policy, politics, business and tech on TV, radio, and the web. A former Division-1 track athlete, Brandon is a graduate of Oral Roberts University.

As an investment Principal, Del leads the fund’s scouting, diligence, and operations in New York. To date, his fund has invested over $7 million into over 100 startups led by founders from groups traditionally overlooked by venture capitalists.

Mac uses the knowledge he gained working in both public and private sectors as a software engineer and CEO to help startups be successful. A Baltimore native, Mac joined a co-op program with the Department of Defense in 2006 and obtained a top-secret security clearance. He went on to become a government contractor working in software development for several companies, including Northrop Grumman and Booz Allen Hamilton.

In October 2009, he co-founded his first tech startup, Given.to, which completed two accelerators, Accelerate Baltimore and NewMe Accelerator. Mac was later named entrepreneur-in-residence at NewMe. Mac and his team sold the technology in 2014. His next venture, RedBerry, was accepted into the Dreamit Ventures Accelerator in Philadelphia.

Mac has been a guest on Huffington Post Live several times and his companies have been featured in many media outlets such as USA Today, Washington Post, BET, CNN Headline News, and Black Enterprise. He attended Morgan State University, majoring in Computer Science.

Our events brings people together to openly discuss and share ideas with like-minded individuals. We welcome entrepreneurs of all types, start-ups of all sizes, industries, and stages to join us in finding the inspiration, resources, and friends that will make them successful. Whether our members are just beginning to build a company, or are years into their venture, We aim to refer to the best services available for helping them achieve their goals.

We aim to work with sponsors and partners who share our vision in helping the start-up community grow and succeed. For event sponsors, email Sponsor@JoinEntre.com

Subscribe and save up with Entre Pro, includes one free pass on all our events and enjoy exclusive benefits & deals, learn more at JoinEntre.com/pro