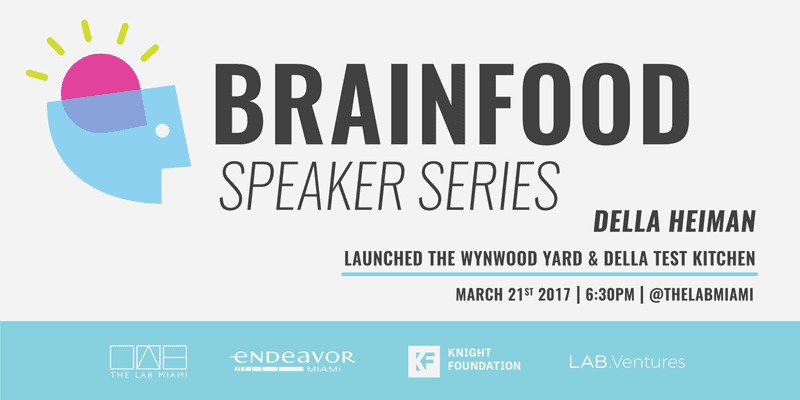 Schedule:
6:30-7:00pm – Registration & Networking
7:00-7:30pm – Keynote Interview
7:30-8:00pm – Audience Q&A
8:00-8:30pm – Wrap-up & Networking
Speaker (Della Heiman)
Della was born in Cincinnati, OH, and has lived and worked in the US, Spain, Chile, Israel, Jordan, China, and Ethiopia in the fields of political communications, textile manufacturing, venture capital, health/wellness, and food service. She has a B.A. in History and Spanish Literature from Washington University in St. Louis, and an MBA in Harvard Business School. In 2015, Della launched The Wynwood Yard and Della Test Kitchen.
Marco Giberti (Moderator)
Marco is a successful entrepreneur and investor with more than 25 years of intensive experience in media, technology and the events industry. He is Founder and CEO of Vesuvio Ventures, providing early stage entrepreneurs access to coaching, partnerships, advisory and capital.
After several years in a successful career as a corporate executive at Apple, Marco pursued his entrepreneurial ambitions and became:

Marco is a Harvard Business School OPM Graduate, and member of YPO, the Young Presidents Organization and a frequent speaker at industry conferences.