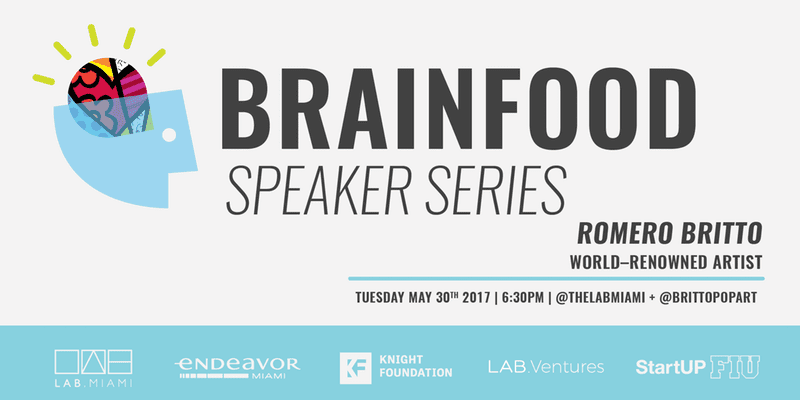 (Speaker) Romero Britto –
With an iconic style that The New York Times described, “exudes warmth, optimism and love,”, Romero Britto is an international artist that uses vibrant, bold and colorful patterns to reflect his optimistic view of the world around him. His playful themes and hard‐edged compositions, combined with his unique talent, unshakable resolve and belief in his art, have granted him worldwide recognition, with exhibition in galleries and museums in over 100 countries and counting.
The artist’s pop sensibility has leant itself to collaborations with global brands such as Audi, Bentley, Coca‐Cola, Walt Disney, Evian, Hublot, and Mattel, to name a few.
Britto’s work evokes happiness and hope using a visual language all its own and is, simply, relatable to all.
(Moderator) Thomas “Tigre” Wenrich
Tigre recently joined The LAB Miami family as CEO of LAB.Ventures, the new Incubator created to build new products, test them in the market, and leverage our corporate partners to turn them into businesses.
Tigre is also an active angel investor and a mentor to several local emerging technology companies, having invested in more than two dozen startups. He is the Lead Director at LiveNinja, an enterprise software platform for video chat, and serves on the Board of Pecan Grove Farms, an Austin, TX-­‐based ranch and nursery. He is also a mentor for Endeavor Global.
In 2009 Tigre joined Andres Moreno as the Founding COO and CFO of Open English, growing the company from commercial launch to over $50M in annual revenues and creating a massive consumer brand. Today Open English is the leading on-­‐line language school in the Americas, having helped nearly 500,000 students to learn English over the internet. Under Tigre’s
leadership, Open English raised over $120M of Venture Capital in four rounds of investment from firms including Redpoint, Insight, and Technology Crossover Ventures.
Tigre began his career as a strategy consultant with The Boston Consulting Group, where he spent 16 years as a partner in the US, Spain and Mexico. Later, from 2006 to 2009, he built a chain of 20 check cashing and PayDay Loan stores in Miami, which he purchased in an MBO and subsequently sold to a larger competitor. He was also a founding investor and Board member of Proteak, a large Latin American forestry business which listed on the Mexican stock exchange in 2010.
Tigre holds a B.A. in International Relations from Stanford University and is fluent in Spanish and English.
Brainfood is a monthly, hands-on discussion with localentrepreneurs who share the secrets of their success. These monthly gatherings will help Miami startups and entrepreneurs understand the opportunities and challenges of launching and growing a business. Every participant will leave with a wealth of new ideas and key, practical advice to advancing one’s own entrepreneurial career. Brainfood is presented by Endeavor Miami and takes place at The LAB Miami in Wynwood, generally on the last Tuesday of each month.
#BrainfoodMIA #LABventures
@thelabmiami | @endeavorMIA | @knightfdn | @startupfiu
Get 10% off with promo code: Community1