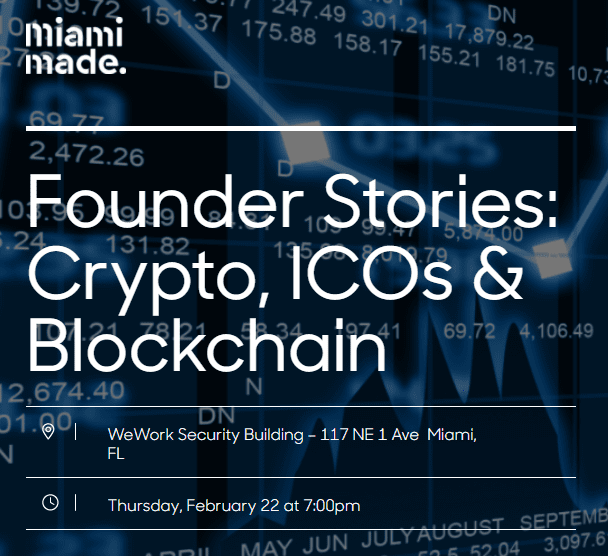 Join Miami made. on 2/22 at 7PM for a complimentary founders-only evening at WeWork Downtown, to discover why fortune favors the bold and what your business can do with Cyprocurrencies, ICO’s and Blockchain technologies in 2018.

“You’re talking about a wave of innovation the likes of which we’ve never seen before. If the internet was the Third Industrial Revolution, blockchain cryptocurrency is the fourth. Those who understand it and are able to apply it to business models through economics and game theory will be creating the models of the future.” – Todd Haselhorst

We are limiting it to the first 100 miami entrepreneurs, so RSVP asap to reserve a seat. You don’t want to miss out!

This will be an intimate setting with Miami founders sharing their true stories. This event and all information shared is confidential for only local entrepreneurs, especially those evaluating next steps with cryptocurrencies, ICO’s and building on Blockchain. As an added gift to attendees, WeWork will provide bottled beer and your choice of swag giveaways.

Albert Santalo, Founder & CEO at 8base, an application development platform and ecosystem that is using disruptive technologies such as Blockchain and AI. Albert is a computer scientist, Internet entrepreneur and angel investor with experience in high growth, venture-backed technology companies. He has raised in excess of $100 million for his companies and is the former Chairman and CEO of CareCloud (reached #127 on the 2014 Inc. 500 list).

Hansell Shook, COO and Head of Corporate Development at Kairos, a facial recognition and computer vision Saas platform. Hansell’s expertise spans venture capital and operations, corporate finance/M&A and technology. Prior to Kairos, Hansell led the M&A and venture capital practice at ADT, the largest home security company in North America. Hansell spent 7 years at Raymond James and Wachovia in M&A and Leveraged Finance, completing over $3B in transactions.

Herwig Konings, Founding Partner at Alphachain. He is the former Managing Director of Miami Venture Capital Association. Herwig founded multiple startups and has been an ICO advisor (Kairos).

Miami made is a founders-only organization creating a thriving local startup ecosystem. We are 150 Founders united as one tribe. We believe in Founders backing Founders. We are proud to be Miami made. We are funded by The Knight Foundation. ” In 2017, Miami was ranked the #1 most entrepreneurial city in the US.”, according to TechCrunch. To learn more, visit miamimade.org and miami founders may attend TTT (monthly meetup).