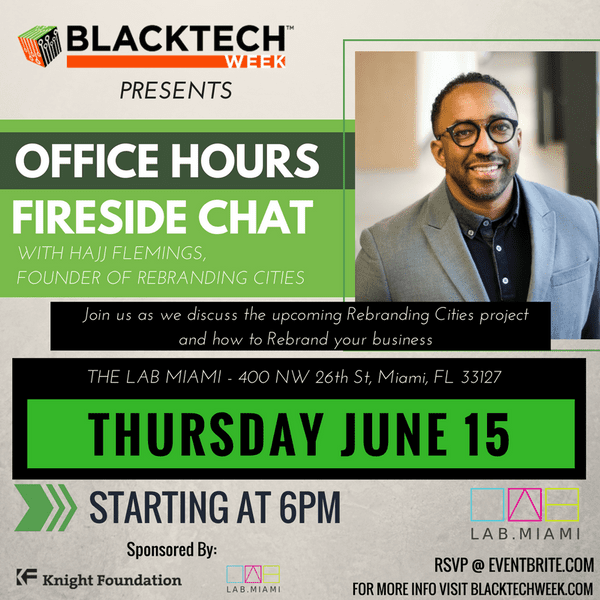 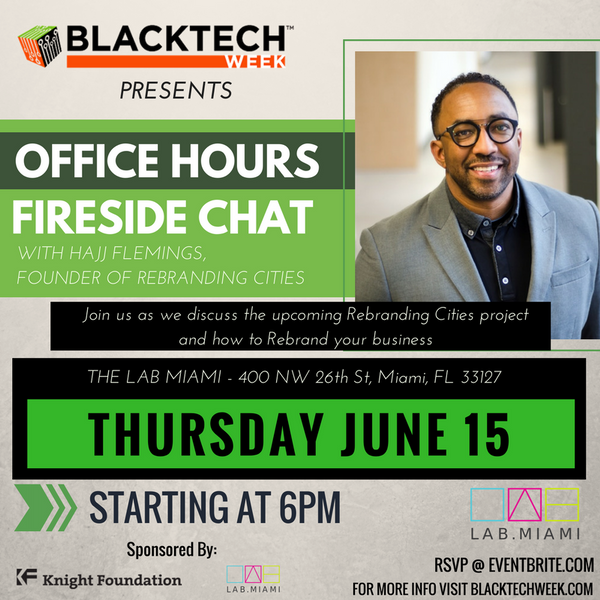 BlackTech- Office Hours is an ongoing extension of the annual BlackTech Week. Each month like-minded start-up entrepreneurs, innovators, and professionals of color -get together to discuss ways to take their business or idea to a new level!
For the month of June, we’re having a Fireside Chat with the amazing Hajj Flemings, Founder of REBRAND Cities. Hajj will be discussing the how his Rebrand Detriot Project won the Knight Cities Challenge, being featured as part of WordPress.com first ever TV-spot, and the next phase of Rebrand Cities’. He’ll be diving into how Brand Camp University is partnering with WordPress.com to accomplish their goal of bringing 10,000 small businesses online. Event Sponsored by Knight Foundation and LAB Miami
Location: The LAB Miami – 400 NW 26th St, Miami, FL 33127
Date: June 15, 2017
Time: 6pm-8pm
About Hajj Flemings:
In 2011, Hajj Flemings was one of eight entrepreneurs selected for the CNN’s Black in America 4: The New Promised Land: Silicon Valley documentary with Soledad O’Brien.
During the filming of that documentary, he came to understand the real meaning of the term ‘meritocracy’ and recognized that lack of access in the technology space was creating a permanent underclass in communities of color. That experience literally changed the course of his life.
Hajj is founder of Brand Camp University, an educational platform that is preparing people for the future of work, and Rebrand Detroit, a civic design and brand project a multi-disciplinary collaboration with the residents, community stakeholders, and local government to change cities—starting with Detroit.
He has worked with clients including Walt Disney, Pitney Bowes, Pfizer, the Detroit Lions, and the U.S. Department of Defense, been an invited speaker at Iowa State University, University of Michigan—Ross School of Business, Davidson College, University of Detroit, and others, and has been featured in the Wall Street Journal, TechCrunch, Mashable and CNN Tech Money on the subjects of startups, digital technology and branding.