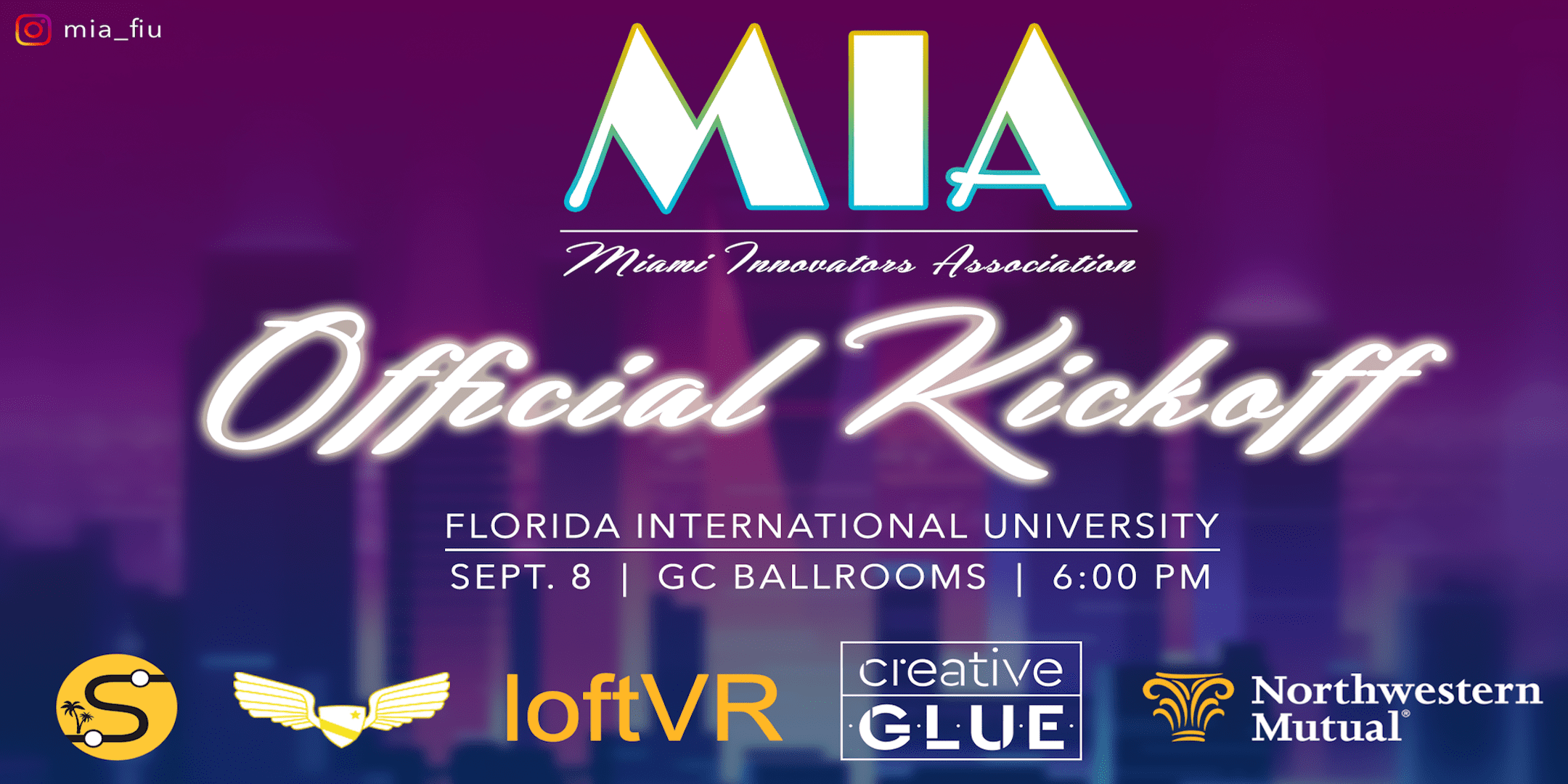 The day is finally here! The Miami Innovators Association is officially launching with our most diverse panel to date. We are featuring two social entrepreneurs coming directly from the Miami scene itself, Jossua Parini and Brittany Jarrin. Two of our long time affiliates, Andrey Parsegov and Marcella MacCarthy are also coming back for our launch after being part of our Summer Speaker Series.  Come out, sit down, and relax over some free food and drinks! Try out our signature virtual reality demos courtesy of our longtime partners at Loft VR and hear about how MIA is aiming to change the innovative landscape of Miami forever from the founders themselves.  This is more than just a networking event, this is a Launch Party!

Co-Founders of Creative G.L.U.E., Jossua Parini & Brittany Jarrin
Two of the most groundbreaking social entrepreneurs in the Miami startup scene, Jossua Parini (pictured right) and Brittany Jarrin (pictured left) are founders of the networking event company called Creative G.L.U.E. Creative G.L.U.E channels the gap between business and creativity while offering an intriguing networking experience that has never been witnessed before. With the recent boom of the Miami startup scene, Parini and Jarrin created six different themed events from art and technology to business and marketing to even fashion carried along six different districts in the Miami-Dade area. Creative G.L.U.E aspires to expand domestically as well as globally. Their ultimate goal is to make their experience the go-to site for start-up companies seeking talent, sponsorships, and investments through networking.

Serial Entreprenur & Co-Founder of Next Level Basketball, Andrey Parsegov
Besides playing in the NBA, Michael Beasley, Henry Walker, and Scotty Hopson all have one thing in common. They all trained with Next Level Basketball. NLB first opened its doors in 2014. The CFO and Co-founder of NLB, Andrey Parsegov, wanted to create a facility to focus on player development and enhancement. With a degree in psychology and being an entrepreneur at heart has allowed him to expand his horizons. With the help of his mentors, he has been able to double his company’s financial growth in under a year. With Miami rapidly growing and being a notorious vacation destination for athletes, Andrey believes that NLB is at the prime location to prosper.

Founder & CEO of Skillied, Marcella McCarthy
Miami’s art scene is growing faster and faster every day, and Marcella McCarthy has been ahead of the game since day one. This young entrepreneur started her journey by co-founding the entrepreneurship club at her alma mater, University of Miami. With a major in English, a minor in business, and a master in journalism Marcella has crafted her web platform, Skillied. Skillied encourages users to “Learn Locally” and allows them to discover local classes and workshops. Whether you want to expand your business or learn a new craft, Skilled has it all.

The Minds Behind the Movement

From three kids in a math class to an Executive Board of fifteen pioneers that aim to make an impact on the community, hear about how the idea of MIA was first conceived and get to know the people that made it all possible. Here at MIA, we collaborate with many companies and organizations in an effort to help them grow. That means providing resources, and you may be one of those resources. Startups and enterprises are almost always hiring, and we can help land you a spot in a great business that you’ll love to work at. Take advantage of all the businesses coming to network, talk to professionals and employers, and talk to us, MIA.
Powered by Eventbrite