How inclusive are we? Challenge is to ‘look deeper’ and 500 Startups summit-goers did just that

Private equity and venture capital funds with gender-balanced senior investment teams generated 10 percent to 20 percent higher returns compared with funds that have a majority of male or female leaders. Females make up just 10 percent of VC and PE partners but invest nearly twice as much in female-run companies as male partners do. Also, when companies have gender-balanced teams, their returns tend to be up to 20 percent higher. These are findings of IFC’s new report called Moving Toward Gender Balance in Private Equity and Venture Capital.

“The move to drive gender diversity is good for business,” said Stephanie Banfo, associate investment officer with IFC, who presented some of the findings at 00 Startups Unity + Inclusion summit in Miami on Thursday.

The report provides a backdrop for the need for such conversations, not only about gender diversity but also underrepresented minorities. Those conversations with founders, investors and community leaders — both local and from Silicon Valley and elsewhere — took place Thursday at the downtown offices of 500 Startups Miami. 500 Startups Miami, led by Ana Paula Gonzales, opened last year and has already held a Demo Day

Here in Miami-Dade, more than 50 percent of the population is foreign born and the number rises to 70 percent if you include first-generations “and we love that,” said Miami-Dade Commissioner Eileen Higgins. That makes Miami-Dade No. 1 in the country.

However, “not all is perfect in the kingdom,” she said. “As diverse as we are, we are not quite there yet.”

Those messages – global and local – underscored the reason for the summit: Though there has been progress, and those successes should be celebrated, there’s still much work to be done. 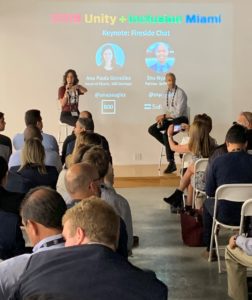 As the conference opened, one big success was celebrated: Softbank confirmed that it will be opening a $5 billion Latin American Fund, huge news for the region. Shu Nyatta, partner of Softbank, said that the region was overlooked by his company for far too long, and it took Marcelo Claure, Sofbank’s COO with a home and business ties in Miami,  to bring the opportunity to the forefront. Claure will head up the new fund.

“We’ve learned at Softbank that if you scratch the surface in any area of the world, you will find amazing founders,” Nyatta said.

Bedy Yang, 500 Startups partner, shared that 500 runs some of the most diverse funds in the industry. When they looked at their recent investments at the seed stage, 30-40 percent of them had a women founder or co-founder. That is 525 companies in its portfolio. They showed up in 500 Startups’ unicorn portfolio companies too.

In five years, the Latinas in Tech organization has grown from a dozen or so women in Silicon Valley to 4,000 women in seven chapters, including Miami, said Gretel Perera, co-founder of Latinas In Tech. Although Latinas make up only a sliver of tech employment, “we see opportunity.”

“How do you walk the talk and fund diverse founders?  You hold yourself accountable. You need to hustle to find these founders because they are not always going to find you,” said Black. “I want to be the first institutional investor that funds a diverse founder with a killer product that no one has dared to fund.”

Investor Mark Kingdon pointed out he doesn’t use a diversity filter when he invests:  “I  am looking for amazing founders.” But he said his portfolio is diverse and that’s because of deal flow – deal flow he wouldn’t see if he wasn’t living in Miami.

Local founders also shared tips for growth and fund-raising.  Among the success stories: Senior-care startup Papa plans to expand to 10 states in the next year. CourtBuddy, the legal-tech startup founded in Miami, is going global, preparing to enter Brazil. Endeavor-backed boating marketplace Boatsetter is already making waves globally and fintech standout NovoPayment has been able to expand globally while bootstrapping.

Business is a contact sport and developing your network is key, as well as exploring many paths to funding, said Silvina Moschini of SheWorks.

With South Florida still drawing only a sliver of VC funding, between 1 and 2 percent, those paths often will take you to San Francisco or Silicon Valley, as they did for WhereByUs, Option Alpha and other Miami companies — at least temporarily.

In CourtBuddy’s case, it relocated to San Francisco permanently because the opportunities for funding opened wide and were impossible to ignore, said co-founder Kristina Jones, who was the 14th black founder in the nation to raise over $1 million.

To founders, Yang advised to have a fund-raising timeline with a deadline “Set the context and ask can I count you in?”

What are companies doing to be more diverse themselves? “For now, we have to kind of force it on companies until it becomes natural. It can’t be just a check off the box effort,” said Amy Klos, head of inclusion of Magic Leap.

Her advice: Cut the BS and talk about the hard stuff.

Companies have been working to expand their pipelines, diversify interview processes and remove bias from job descriptions. While the numbers may look better, if you look at the development teams, you’ll likely see nearly all male teams, said Samiur Rahman of Breezy HR.

“We noticed that we look diverse but we are very siloed. A couple of years in, we were getting some heat. We sought out opportunity but we were looking in places that we knew the best. The challenge was to look deeper.”

As one move in that direction, on Thursday, Knight Foundation announced it was granting $250,000, together with Microsoft, to create on-ramps for women and other underrepresented communities to break into the tech and startup community, Moas said. These grants will provide funding for more art teachers to be trained to deliver computer instruction in classrooms through CodeArt and more fellowships for Wyncode web development courses for residents of low income, underrepresented communities. You can read more from Raul Moas here.