How to give a 'Miami Tour': Brian Brackeen spills his secrets of success

These days, many of our newcomers who have discovered our slice of paradise may not need much convincing to stay, but it wasn’t always that way.

Brian Brackeen has been giving his “Miami tour” to potential #MiamiTech recruits for at least seven years, with a striking success rate. With all the chatter on Twitter today about what makes Miami, well, Miami, I thought I would get Brian’s perspective.  These days, Brian  is general partner of Lightship Capital, and says he’s found his “life’s work” and can’t imagine a career more fulfilling than being a funder of startups led by people of color underrepresented in venture in the Midwest and the South. But there’s still time for occasional Miami tours, and this founder-turned-funder has always been an unabashed Miami booster  since I met him in 2011 or 2012: “Miami continues to rise. Our resilience is born on our mix of immigrant grit, American ingenuity, and Miami hustle,” he says. (Miami haters, you might as well skip this story).

While many #MiamiTechies have been giving tours over the years, of course, Brian thinks he started his around 2013-2014 while building Kairos. At first they were a recruiting tool for the startup founder.

“Everyone had the same questions back then, which is ‘is Miami just beaches, just sun and fun, do you guys actually work?’ I was always trying to break through that bias in their head.”

In the very early days, Brian would show the recruits Brickell but the tour mainly revolved around Wynwood’s Panther Coffee, The LAB Miami (the first office for Kairos and many of Miami’s OG startups), Wynwood Walls  and not much else. As they’d walk around the artsy streets, Brian would tell them that as coders, they are going to get stuck from time to time, and here you can just close your laptop and walk out the door and be inspired by the street art and energy to get the creative juices flowing again. And even back then, he said, on his tours he’d always run into Miami startup founders who would share their story (people thought Will Weinraub, co-founder of LiveNinja, was a plant).

As the months and years went by, his “Miami Tour” expanded, and he started to give tours to founders that were interested in Miami – or should be. Matt Haggman, then Knight’s Miami program director, asked him to give a Venture for America leader a tour and it ended up being 4 to 5 hours. “She came to Miami thinking we didn’t need VFA, and left thinking ‘we have to be here’. A very cool day.”

Brian approached  founders in the Latin American travel space he met at a Detroit TechStars Demo Day and told them they should be in Miami.  “Come on down and I will host you for a tour,” he said. They did. By this time Brian’s tour had evolved, starting with the Wynwood walk, then hitting Coconut Grove, swinging by Open English and Sony’s dev shop there, checking out Green Street and a taste of the Grove’s residential neighborhoods, then heading back up through Brickell with a stop at Mary Brickell Village, then downtown to Miami Dade College’s Idea Center. At the Idea Center, he said to the Latin American travel startup founders, “you guys are going to need employees and interns – there is no better place in the United States of America to hire bilingual people coming out of college than right here.” He sealed the deal.

Brian sprinkled his tours with stories. At Miami Dade College, it would be about Dr. Padron and how he got the Presidential Medal of Freedom and how MDC is full of first-generation college students who want to live the American Dream and how the college democratizes that access for lots of people.

Then he’d give a spiel about Miami’s youthful spirit, and how the city itself is always thinking big, even building museums right on the water. Wynwood itself is the big vision of Tony Goldman. 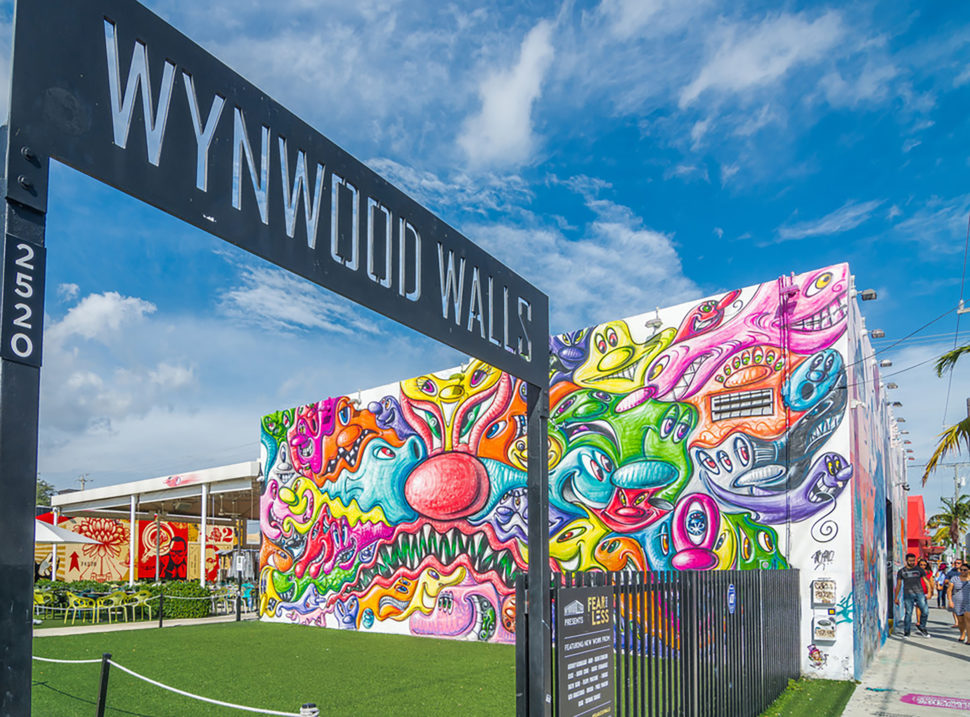 So all he has to do on his tour is show people where each ingredient of the recipe exists.

“You can see Will [Weinraub] in the coffee shop, you can see Goldman Sachs’ work in the 10,000 Small Businesses program at MDC. That community and that realness and all the things I just talked about have converted almost every single person on my tours.”

Brian’s tours range from parties of 1 or 2 to most recently, 10. He says his conversion rate is in the 90s. “For the few people that I couldn’t convert, schools have been a challenge.”

This year, the tours have been nearly all outside and socially distanced. “We go to PAMM (Perez Art Museum Miami) on the steps, the Frost (Frost Science Museum), we do a lot of restaurants that open to the outdoors.”

Brian starts further north now, usually at Ironside in Little Haiti where he tells the story of Ironside’s founder who came to Miami from Israel in the ‘70s penniless, worked as a South Beach busboy and saved every dollar. He had a dream and a vision for Ironside and started buying warehouses in that neighborhood, one by one, and then converted them to the vibrant, creative space Ironside is today, where all the buildings open up to a common courtyard and garden. “People are building, renovating everywhere all the time, you don’t have to be in Wynwood to feel  the energy of Miami,” Brian says.

Another stop (and story) is at  Fireman Derek’s Bakeshop in Wynwood – for the love of pie, very creative pie. When Brian mentored during Mentor Days at the Idea Center, Derek would  ask him all about running a business. “You are tasting the benefit of Miami. In Miami you can be a fireman and open a great pie shop.” (you can read Fireman Derek’s amazing back story here)

Brian’s tours are a mix of people, places, art, culture and story telling.  “I do run into a lot of founders on my tours but honest to god I don’t schedule any of them, it just happens. I’ve seen Brian Breslin a million times, I see Auston Bunsen in Midtown all the time and they will always stop and talk about their story,” Brian says. He’ll drop by Wyncode (now BrainStation), too, so the founders can meet some of their future talent pool in action.

Brian recently took the Nigerian founders of OjaExpress, a Chicago startup specializing in ethnic food delivery, on a tour. “I just shared the data, not only does Miami have a large immigrant population but there is also a large wealthy immigrant population likely to use the product. I talked to them about talent, and about the evolving landscape of funding now with the like-minded Black Angels Miami here now.”

But most importantly, he said,  “I share one of the reasons minority founders  of all stripes, but particularly Black founders, can do well in Miami. The majority, the wealthiest group here, is brown, and while everyone can have their own biases, they too live in a world where they go to travel somewhere else and they are not treated fairly and they are more likely to understand than others. Folks from Latin America are less likely to see you as an African American and more likely to see you as an American who wants the opportunity to be successful and that is a significant difference.”

Folks always seem surprised when Brian points out PAMM’s giving wall, where there of course well-known names but also “Anonymous” donors on every tier. He always says, “be sure that if you do take us up on this moving to Miami thing, that you also take up the culture of giving, and you do this tour for someone else, and you look out for someone else, because that is an important part of what we’re building here.”

And what about the funny moments: “Serendipitous encounters happen every tour and people like to think that’s me paying people to do it.”  If he’s touring with a fintech founder and there is someone from Goldman Sachs or Morgan Stanley at the next table in a restaurant, or it’s a media founder, and Adriana Cisnersos is nearby, Brian will ask them to chat. All have happened.

Recently, Brian hosted a group of Black founders. It was free day at the the PAMM, and they went in, and PAMM’s director, Franklin Sirmans, just happened to be there with his family. He shared the story of the PAMM and chatted about the art collection.

“People might think ‘I must be meant to be here because why else would this happen?’

Well, it’s happened because Brian knows a thousand people in town,” he said.

Yet moments can’t be manufactured, like a flock of all white cranes landing right in front of the tour. He says he just gets lucky sometimes.

The big dramatic finish to his tour is usually the Frost Science, one of Miami’s newer museums, to underscore the excitement of Miami as a young city still being created. “I take them right into the Oculus under the tank.  These buildings are iconic and are themselves art. But when you are Miami, you can do things any way you want. And the PAMM is another example of that with its distinctive inside-outside architecture. When you are young, you can make different decisions.”

“So at the Frost, you can see stingrays from the bottom up, it changes everything.. You can do this in your own business —  the Oculus and the PAMM are manifestations of a mindset shift.”

So the decision to move to Miami is not about the low taxes because that is already built into the equation, Brian says. Individuals have different whys, but one of the common whys is tribe.

“They want to be in a place where the people around them have come to the similar conclusions, it is wonderful. If you are right for here, you’ve already felt it on the tour. You are supposed to be here.” 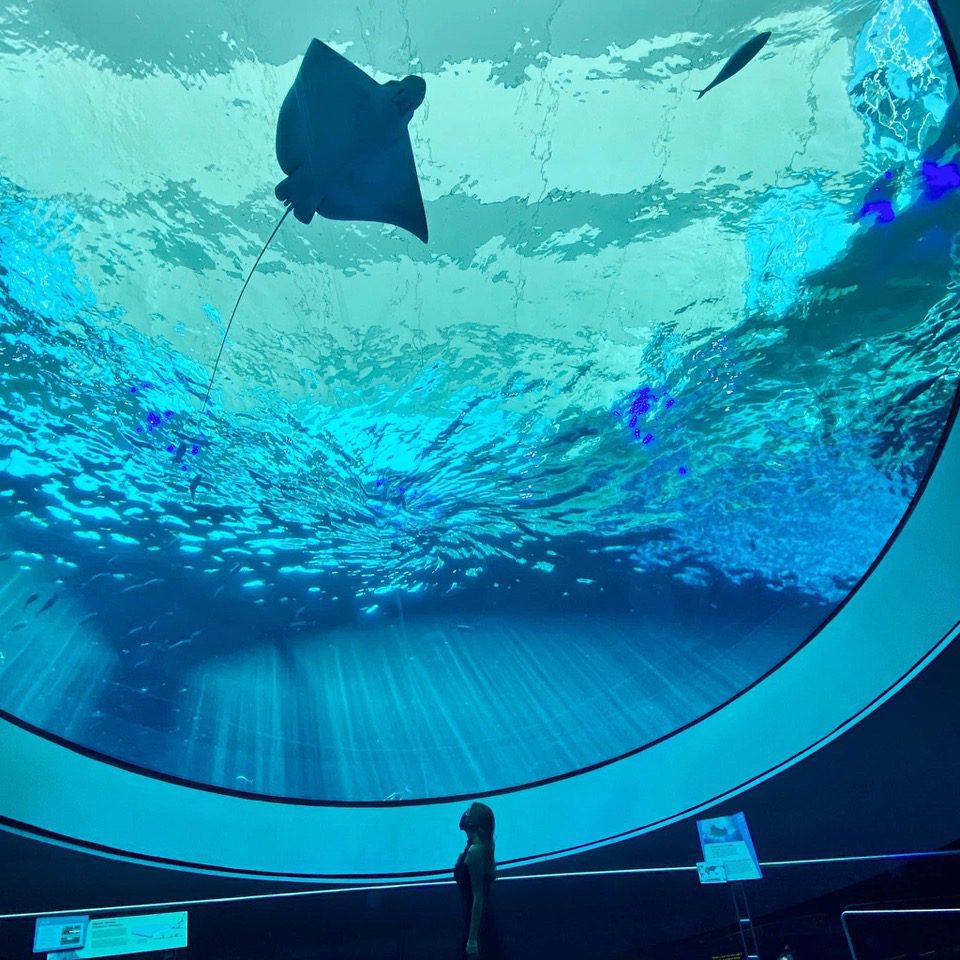 Epilogue: After this post ran, Candice Brackeen tweeted. “He gave me this tour on our first date, @ndahlberg. We were engaged 6 weeks later.” Now that’s success!