Dirt biking and entrepreneurship have more in common than you might think: the adrenaline rush, the constant pursuit of achievement, and the deep bonds among participants.

Miami native Ryan Amoils has been passionate about both dirt biking and entrepreneurship from an early age. “I got my first dirt bike when I was four years old,” he told Refresh Miami. About a decade later, Amoils got into entrepreneurship. “I always found myself buying and selling anything I could get my hands on,” he said. He started the entrepreneurship club at his high school and was a semifinalist at the Miami Herald’s Business Plan Challenge in 2014.

It wasn’t until he started studying at the University of Florida that Amoils began to connect these two hobbies. “Once I was in college, I realized what an expensive sport it can be. A bike alone can cost $8,000. So I started buying and selling motocross gear on the side.”

This side hustle was an educational moment for Amoils. “I realized that people didn’t enjoy existing marketplaces for dirt bike gear, like Facebook and eBay. People didn’t feel safe anymore – they didn’t trust those systems.”

That realization inspired him to set up MX Locker, a platform for buying and selling dirt bikes, bike parts, and motocross-related gear.

In 2019, three months after graduating from college, Amoils launched the marketplace. “We started with just two used dirt bike parts for sale, and now we have thousands.” He was joined by Co-Founder/CTO and fellow UF graduate Andrew Samole in January 2021. (Both co-founders are pictured above)

MX Locker’s growth has been equally rapid, scaling to 13,000 registered accounts and 45,000 monthly users over the past year. MX Locker’s app got more than 5,000 downloads in the first two weeks it was launched, which made it skyrocket into the top 200 shopping apps in the App Store. 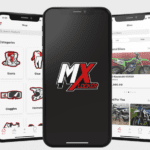 This growth tracks with the overall dirt bike industry. Last year alone, motocross enthusiasts in the US spent $15B on riding gear, bike parts, and dirt bikes. That’s a 50% jump from 2019, spurred by an increased interest in the sport because of the pandemic. “The industry is having trouble fulfilling orders,” Amoils said. “That helps us in a way because people are coming to our site to find used goods.”

Their key to success? According to Amoils, it all comes down to one word: community. “Without our community of buyers and sellers, we wouldn’t be where we are today. We always keep the dirt bike community in mind.”

MX Locker was recently selected for EndeavorLAB, a two-month accelerator program run by the Coral Gables-based entrepreneurship non-profit Endeavor Miami. Amoils said that he hopes this program will set up MX Locker for a successful seed round: “We’re looking to take on investments to scale this category and eventually move onto other sectors at the intersection of extreme sports and adventure sports.”

For this Miami tech native, building in his hometown is ideal: “I’m really excited to stay in Miami after graduating from UF. It was great to come back and see entrepreneurs from all over the country and the world here.”