‘I get a notice of a new company moving to Miami every day’ – Michael Sarasti, Venture Miami

“How can I help?” These four words tweeted by Miami Mayor Francis Suarez have reverberated around the country, and the world. They represent a tangible inflection point that signaled a welcoming attitude towards technology, innovation, and progress.

However, behind these four words is a story of years of innovation achieved through planning, determination, and collaboration. Government organizations that are nimble, open minded, and relentlessly pushing to be better.

For the last decade and a half, Michael Sarasti has been at the center of these public sector initiatives. He is currently the CIO, as well as the Director of Innovation and Tech, for the City of Miami and part of the City’s Venture Miami team. Previously, he spent a decade working on digital innovation for Miami-Dade County.

Refresh Miami sat down with Sarasti to dive into his work at City Hall, his thoughts on the Miami tech movement, and the role of the public sector in developing Miami’s innovation ecosystem.

Developing a frictionless digital experience for setting up a business

One of Sarasti’s flagship initiatives has been eStart, an online portal that enables citizens to access all the government services they need to establish a business in the city. “We wanted to refine what has been historically a difficult experience for customers,” said Sarasti. In many cases, digitizing these processes required fixing or replacing legacy systems.

And digitization was sorely needed. As an example, Sarasti said that citizens previously could wait up to 30 days for the city to send data to the finance department to print and mail a copy of a business license to them. That caused issues for entrepreneurs who were under the impression that they had to wait for the license to arrive before starting to work (actually, the license is valid the minute the payment is made). Sarasti expressed empathy for the citizens negatively affected by these inefficiencies: “That’s an extra lease payment a business might have to make.”

Over the weekend, the City of Miami upgraded their website, now known as “eCityHall.” Sarasti called this “the culmination of a multi-year process,” including “all the user testing, data-driven work [the City has] been doing over the years.”

Sarasti underscored the efforts of “superstar” operators like Maria Cabrera, who oversees the business licensing work, and Manny Otero, who runs the Digital Services program, in getting this initiative off the ground.

Data is a big component of innovation work, Sarasti explained. A top priority for his innovation team has been to more efficiently and effectively collect, interpret, and leverage data to make citizens’ lives better.

Sarasti’s department recently hired Jennifer Hernandez as their senior data scientist. This strategic hire gives the city a more granular understanding of how citizens are interacting with the government’s digital tools. Simultaneously, Hernandez will help the city determine how to improve the user experience of its services.

For instance, the team analyzed how long it takes users to navigate through each step of online processes like business licensing. The goal was to optimize the site by identifying places where people were spending more time and had more difficulty.

“Data is going to help us achieve the city’s potential by improving three main focuses that the city has: quality of life, pathways to prosperity, and resilience,” Hernandez explained in a video promoting her role.

“I’m excited that we have the senior data scientist position now,” said Sarasti, noting that the job initially began as a fellowship. “Now that we have data capacity in the City, we would love to scale it more.”

Readers can help the City of Miami with their eCityHall initiative by providing user feedback here.

Building Miami into a smart city with data-driven, user-informed policymaking at scale

There is a lot of hype around “smart cities,” or urban areas that leverage technology to collect data and improve operations. Sarasti acknowledged that he has vacillated over the years between seeing the term as more marketing-driven or meaningful. Either way, there is a practical use for the term, in his estimation: “It has created an appetite for our innovation initiatives.”

He continued: “To be a smart city means that you are not just generating a bunch of data, but that you have a certain level of sophistication to process that data and make it meaningful.” In that sense, Sarasti said that the excitement around smart cities has made it “much easier to advocate for data driven decision making because we want to be a smart city.”

Miami does face some unique challenges, however. “The City of Miami is in an interesting spot with the smart cities push because we don’t own a lot of the infrastructure that traditionally cities use to become ‘smart’,” he said. That includes street lighting, much of which is owned by the county or FPL.

“Being a smart city is more of a mindset,” Sarasti said. “The goals of a smart city are the same as being a high functioning city,” like delivering data-driven, user-informed policymaking at scale. 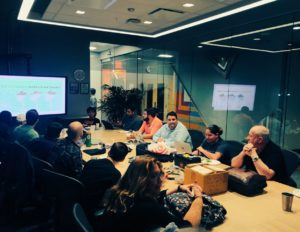 Charting the Miami tech boom: ‘This has got to be a moment for everyone’

For Sarasti, the recent influx in tech companies and talent is a continuation and acceleration of the excitement he has observed since his early days working at the county. In his view, Mayor Suarez’s “How can I help?” tweet “catalyzed the activity that was already happening and brought it all to the table.” And this time, key players in the ecosystem were ready, willing, and able to make it happen: “Everyone said, ‘you know what? You’re ready to seize the moment? We’re ready to seize the moment.”

What excites Sarasti most about the recent attention is that it showed Miami’s “strength, ability, and resilience.” While the Miami tech community’s welcoming attitude may have lured many to the city, Sarasti thinks that one of the factors that is making them stay is the “diversity of backgrounds and diversity of thought.”

From his position on the front lines of the Miami tech moment, as part of Mayor Suarez’s Venture Miami team, Sarasti said that the excitement has yet to wear off. “I get a notice of a new company moving to Miami every day.”

But it’s not just about new companies. “This has got to be a moment for everyone,” said Sarasti. “We are really trying to be intentional and making sure that we have no one left behind.”

Sarasti urges Miamians to commit to getting involved in projects that have a positive impact. “Whether there’s a certain skill set that you have, or it’s a product that you’re building here, think about how you can give back. How can you make sure that you’re bringing people along the way, and that you have a people focus.”