SoftBank commits another $3B to Latin America's tech boom

‘We expect that 2022 will be the biggest IPO year in Latin America’s history. Now is the time for us to double down on our commitment to the region’ – Marcelo Claure

Building on the success of its $5 billion SoftBank Latin America Fund, SoftBank Group announced the launch of Fund II dedicated to funding tech companies in Latin America. The global investment giant announced today it is kickstarting the new fund with $3 billion and may raise more.

SoftBank is widely credited with igniting the global VC  boom in the Latin America region when it launched its first fund of $5 billion in 2019, which included its 2019 mega-bet on Colombia’s Rappi, now one of the fastest-growing startups in the region. Already,  2021 is a record-busting year for the region’s VC, and SoftBank’s Fund II will enable SoftBank to invest in a wider range of stages of companies from seed to publicly traded, with a focus on startups that are using AI and other emerging technologies to disrupt e-commerce, digital financial services, healthcare, education, blockchain, and enterprise software, among others, SoftBank announced this morning.

The SoftBank Latin America Fund is headed by Marcelo Claure, Executive VP & COO of SoftBank Group Corp. and SEO of SoftBank Group International, and the investment team is run by Managing Partners Shu Nyatta, now based in Miami, and Paulo Passoni, with an operations team led by Alex Szapiro, Operating Partner and Head of Brazil. The investment and operations teams include more than 60 people, operating out of its growing hub in Miami, as well as São Paulo and Mexico City.

Claure said in a statement: “Over the past two years, we have seen tremendous success and returns from the SoftBank Latin America Fund that far exceeded our expectations. The amazing work and vision that Latin America’s entrepreneurs have demonstrated in the region gives us confidence that its digital transformation will continue to accelerate – in fact, we expect that 2022 will be the biggest IPO year in Latin America’s history. Now is the time for us to double down on our commitment to the region. We will continue to support the growth of technology companies across nearly three dozen countries and are proud to be the most active technology investor in the region.”

Indeed the returns are impressive. With the inaugural fund, SoftBank has invested  $3.5 billion in 48 companies that had a combined value of $6.9 billion at the end of the first half 20201 and the fun generated a net IRR of 85%, SoftBank’s announcement said. SoftBank has backed 15 of the 25 LatAm unicorns, including QuintoAndar, Rappi, Mercado Bitcoin, GymPass and MadeiraMadeira.

With SoftBank leading the way, global investors have been betting big on Latin America and its market of 660 million consumers, with no signs of a slowdown. Investors injected $9.38 billion in Latin American companies in the first half of this year, nearly doubling any other year, according to CB Insights Q2 2021 State of Venture Report. 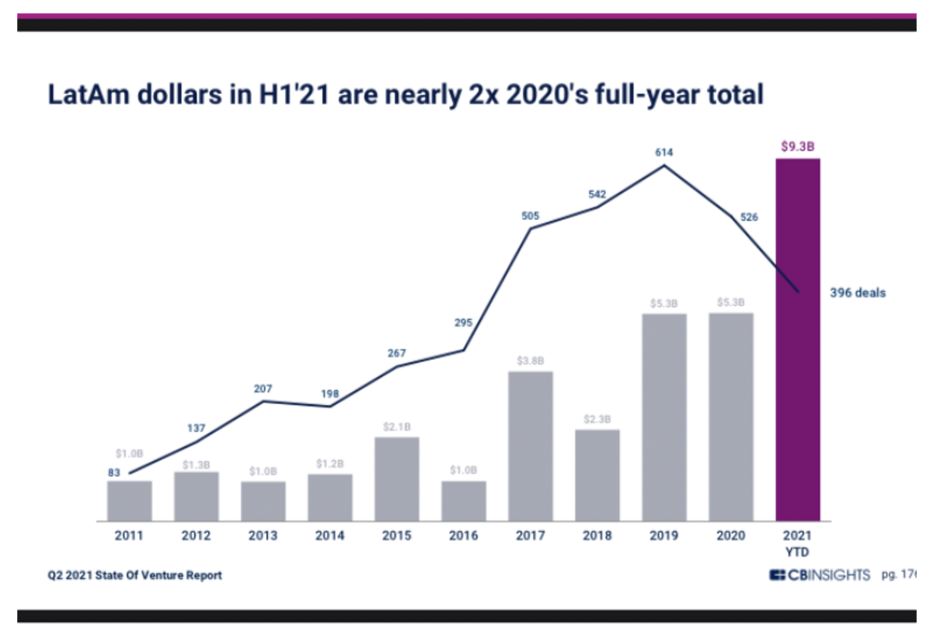 As I reported recently in eMerge America’s  Insights report, venture capital investment in Latin America this year will likely exceed the activity of the past five years combined.

In the first half alone, MadeiraMadeira, the Brazilian online household furnishings seller, raised $190 million, led by SoftBank and Dynamo; Loggi, the Brazilian delivery app raised $205 million in Q1, led by SoftBank and Microsoft. The SoftBank-backed  QuintoAndar, the Brazilian ecommerce marketplace. raised $300 million.  This quarter,  it co-led a $350 million round in Argentina’s Ualá, a personal finance management app. Download the latest edition of eMerge Insights here for more about the Latin American tech boom.

“Latin America is one of the most important economic regions in the world, and SoftBank will continue to drive technology adoption that will benefit hundreds of millions of people in this part of the world. There is so much innovation and disruption taking place in Latin America, and I believe the business opportunities there have never been stronger,” said Mayayoshi Son, Chairman and CEO of SoftBank Group, in a statement. “Latin America is a critical part of our strategy – this is why we are expanding our presence and doubling down on our commitment with Marcelo at the helm.”

To be sure, what’s good for Latin America is good for Miami too.