This Broward College initiative is breaking down barriers to entrepreneurship

These days, it’s easy to forget that entrepreneurship is about more than influencers espousing hustle culture on Instagram and venture capitalists ruminating on Twitter.

Broward College’s Imran A. Siddiqui  wants to redefine what it means to be an entrepreneur. Siddiqui tries to counteract the narrative of the silver-spoon founder with a vision of being an entrepreneur as “a bucket of skills you can embody.” In that sense, he believes that entrepreneurship has the possibility to change peoples’ lives for the better.

Siddiqui, a native South Floridian and an attorney by trade who spent a decade working as a political organizer, leads the Broward College Entrepreneurial Experience (BCEx), an initiative that aims to make entrepreneurship accessible to all.

“We have the ambitious goal of performing a culture shift in higher education towards entrepreneurship and innovation,” he told Refresh Miami.

The core activity of BCEx is its accelerator program. Over the course of 10 weeks, it takes participants from ideation through to the development of a business plan and a pitch deck. There is no fee to join, and the program provides the opportunity to pitch for a modest amount of early stage funding from BCEx’s venture fund.

BCEx was launched in 2018 as an evolution of Broward College’s previous accelerator, Start Up Now, which ran from 2016 to 2018. BCEx had its first cohort in summer 2020. “Our mantra is turning challenge into opportunity,” Siddiqui says of the decision to make – and keep – the program 100% virtual.

Siddiqui said that BCEx’s fourth cohort has received a record number of applications. “I’m very proud of what we are achieving.”

BCEx is run alongside Broward College’s campuswide initiative Broward UP, which Siddiqui described as a way “to use our college to break intergenerational poverty and change lives.”

“Our participants are primarily female,” Siddiqui said. “We have lots of minorities and first generation folks” – two categories that are historically underrepresented in the entrepreneurial community.

All members of our community can join, not just Broward College students and staff.

Despite only being in existence for about a year, BCEx already has a handful of success stories. The winner of Cohort 1’s pitch competition was Royce Lopez, an 18-year-old Cuban-American Broward College graduating sophomore who came up with an idea for an app that offers full-stack, mobile-based support for the Hispanic trucking community. 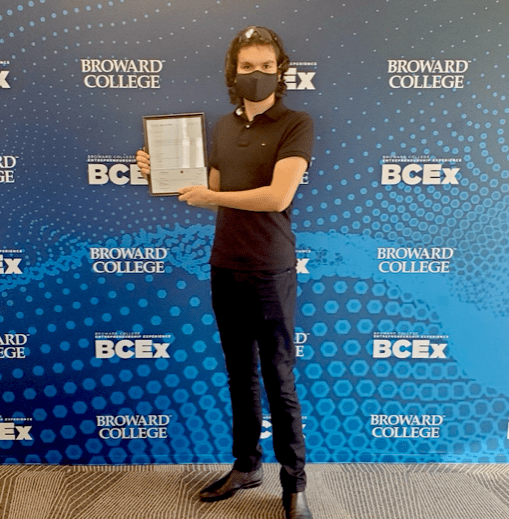 Siddiqui said that “Royce comes from a family of truckers and is knowledgeable about the needs of this growing niche community.” Lopez’s introductory product will be commercial trucking insurance.

Another successful and timely project to come out of BCEx is “Best Candidate,” created by founder Gino Herring. Developed as a response to the social unrest last summer, Best Candidate connects citizens to information related to elections and elected officials to facilitate more effective civic engagement. David Okoro (pictured at top of post), runs a successful urban clothing line D1H Apparel (which stands for Day 1 Hustlers), and also participated in Cohort 1.

Looking forward, Siddiqui plans to continue enabling BCEx to change the lives of aspiring entrepreneurs in our region.

“I loved South Florida before it was cool,” he said. Now he relishes the opportunity to make a difference: “I always believed in South Florida and wanted to do what I can to build it up.”

For more information on BCEx, contact Imran Siddiqui at isiddiq1@broward.edu or find @bcexbroward on social media.