To buy or not to buy? Sustalytics delivers customer insights so fashion brands produce styles that sell

You know when you walk into a clothing store and it seems like an entire product line is on clearance? Sometimes it’s a particular color, but other times it’s every single piece.

In addition to this error in judgement costing the company a ton of money, whatever doesn’t get sold, eventually gets burned, thus producing an exorbitant amount of global waste. You may be thinking, “Why not give it to those in need?” Well, because doing so would dilute the brand image. If we get down to the nitty gritty, the fashion industry loses about $500 billion of value every year due to the clothes that are thrown into landfills — or burned.

In terms of doing business in 2021, it sounds like an incredibly inefficient system, where buyers and designers base the next collection on previous sales — and pure gut instincts. The process sounds archaic even.

As the former head of buying and design for Zara & Bershka, the Spaniard, Julie Evans, experienced this mind-boggling pattern and resulting waste, repeatedly.

“I thought, the way I grew up, I recycle, I garden, everything about me is sustainable, except my career,” she said, about her realization that there simply has to be a better – more sustainable – way to produce and sell clothes.

After a couple of other stints in the fashion industry in Europe, she decided she was going to bring fashion buying and design into the 21 century by centering the process around user feedback and data. She founded Sustalytics in Paris and in 2018 moved the company to Miami. It started as a low-tech consultancy where she surveyed fashion brand customers by showing them images of a design and asking if they would buy it or not.

“It turns out the French, they don’t like hot pink,” Evans said, ”So maybe a company makes a sweater in hot pink, but we know not to merchandise the Paris store with that color because it won’t sell,” she said as another example of the potential use of the user feedback.

Evans explained that a lot of design or buying decisions are based on previous successes, but one category which is completely rogue, is prints and graphics. “There are no tools in the world that can predict what graphics will do well, because there is no past sales data on that.”

What started as a solo venture, now has 2 employees, Evans as the CEO and a head of marketing, in addition to contractors. In order to scale the company, Evans knew she would need tech to be a major component of the business and she would also have to make the product financially accessible. She decided to venture away from the consultancy model and migrate to a subscription SaaS product that starts at $49/month.

Today, the company counts Galeries Lafayette – the famous, high-end Parisian department store chain – as its client. Other household names include Havaianas, an “American jeans brand we all have in our closest but that I can’t name,” and Miami’s very own Eberjey, among several other less recognized brands in the U.S.

Previously, Sustalytics involved the design house in every aspect of the survey process, from building the survey to executing it, but Evans learned that, “They don’t really care how the sausage is made. They just want to see the results,” she said. So now, the company builds the survey, but Sustalytics finds the consumers and processes the results.

A new area of focus is Generation Z. “At first we surveyed companies’ existing clients, but what the [brands] all really want is to figure out Generation Z, because they make up 40% of the consumers,” Evans said. Through chatbots, Sustalytics engages users and gives them product options from which to choose and they indicate what products they are most likely to buy. 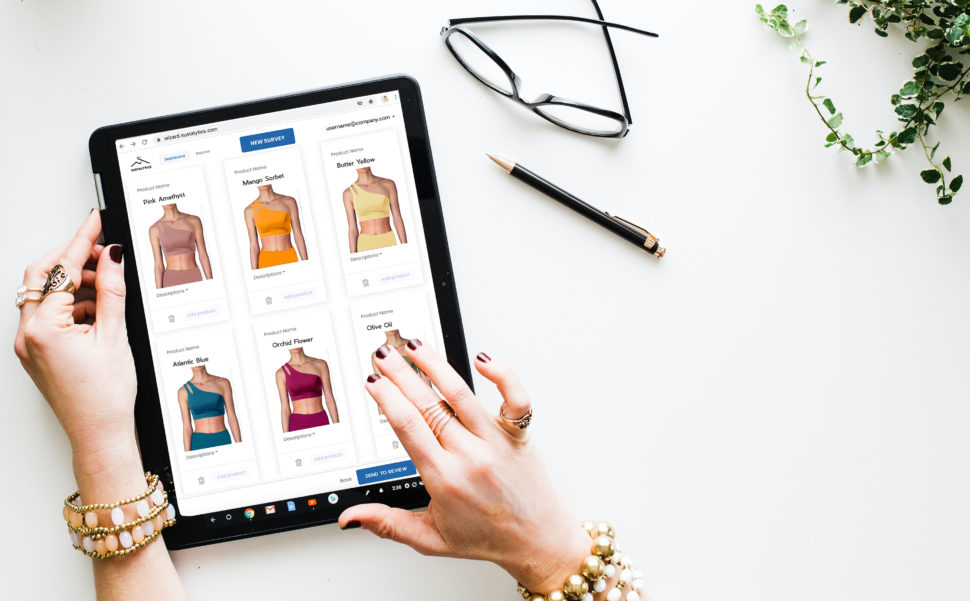 “For example, we test upto 10 bags in one survey, and the consumer will say how likely they are to buy the product. We take into account how long they spend on the survey, what kind of phone they use, and then we clean up the data and present the 10 bags in a visual ranking format, and then the company can clearly see what bags are most likely to sell,” Evans explained.

Evans chose Miami as her HQ for personal reasons, but to her surprise, it’s been the best place for her to house her startup, she said. “People talk about being remote today, but tech has always been remote. The fashion brands I work with are all over the world. Also, everyone told me I should move to Sillicon Valley, but you know what, there I would just be one more small fish. Miami Tech really cares about the success of your business,” she said. “If I were somewhere else, I probably wouldn’t even be talking to you!” she added.

The company has been bootstrapped and is looking to raise a seed round of $550,000.