Scenes from Miami Hack Week: Parties, yes, but much more than that

Aspire co-founders Anish Jain and Justin Lin were hard at work turning their “computers into employees” when I stepped into Casa Lula. They flew in for Miami Hack Week from New York and Los Angeles, respectively, to explore what the Miami hype was all about, but by Thursday night they were seriously considering relocating, spurred by how open, friendly and collaborative the community has been.

Their gracious hosts, Matthew and Michael Vega-Sanz, had two main goals in mind for hosting a house during Miami Hack Week: Recruit great talent to their InsurTech startup, Lula, and have teams work on a product they were looking to develop at the company. 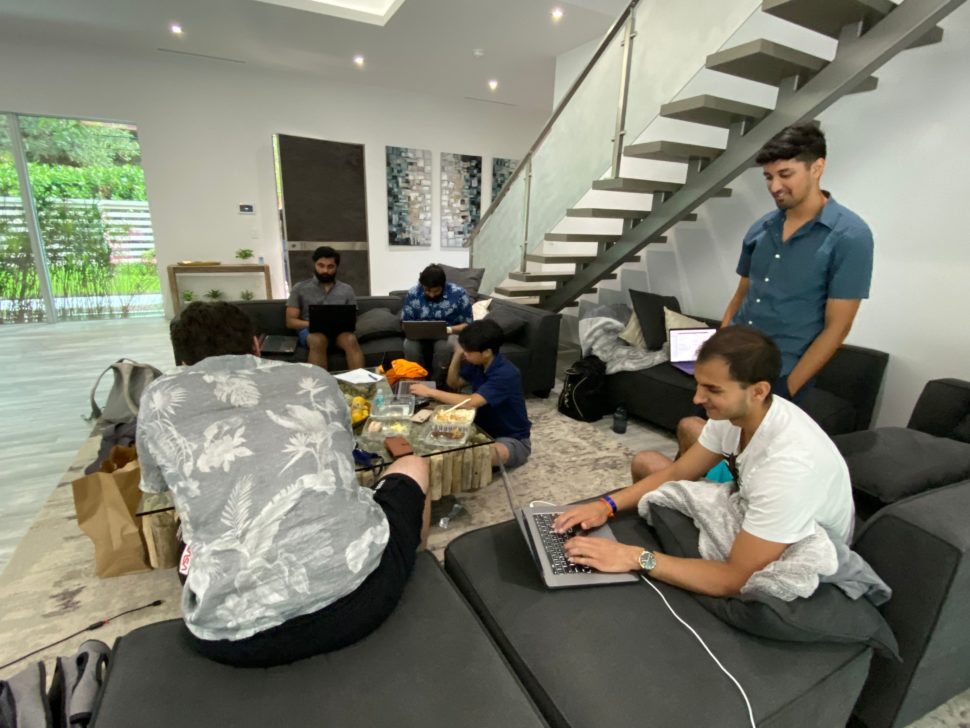 “Our team went in with the singular goal of finding exceptional talent to recruit, and we found multiple individuals who we will be extending offers to” said Matthew. “We were blown away by some of the stuff they built, and the way they worked, while they were blown away by the energy of the city and the opportunities within the Miami tech scene. We had such a great experience I already told the MHW team to count us in as a sponsor for all future events”.

The house that night became a family affair with Mama and Papa Vega-Sanz serving up Cuban pastries, passing out Lula swag and beaming with pride. Jenna Chong, Lula’s Head of People Operations who recently moved to Miami to join the Lula team alongside her husband, served as mixologist, offering guests white russians and gin and tonics. 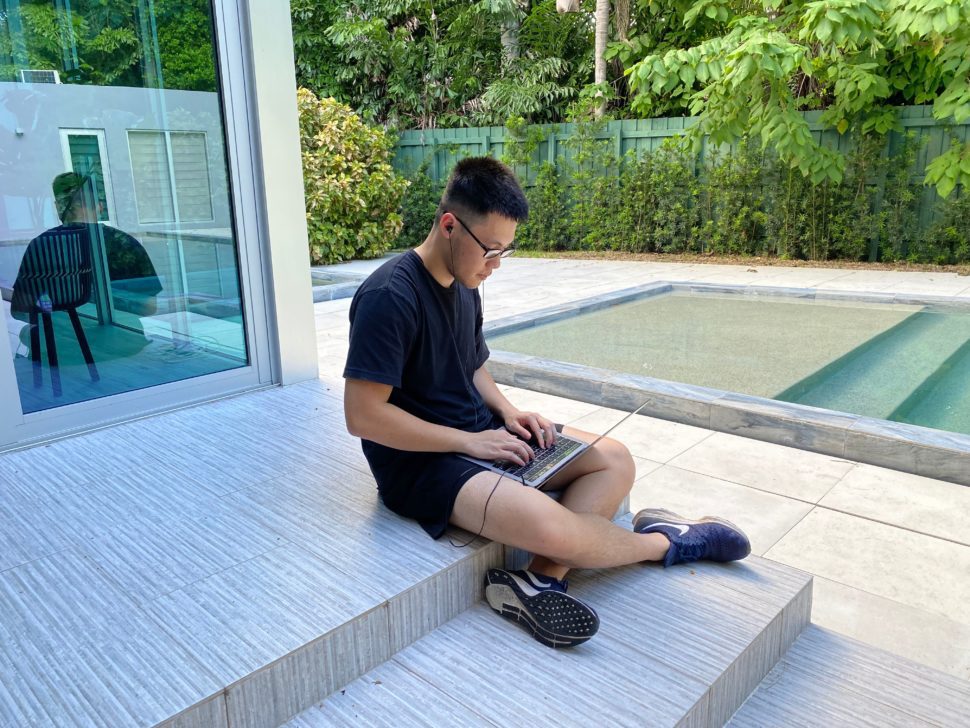 Heading north, another South Florida-native, Auston Bunsen, and the QuickNode team hosted a house of their own focused on crypto including nightly events. I stopped by on Tuesday night for a two-hour fireside chat between Anthony Pompliano, entrepreneur, investor and host of The Pomp Podcast, and QuickNode’s VP of Revenue, Amol Shah. Topics ranged from the generational shift in mindset towards crypto and investing, El Salvador’s move to make bitcoin a legal tender, and Pomp’s move from New York to Miami, where he said he is overall much happier (you can find a livestream of the talk here). 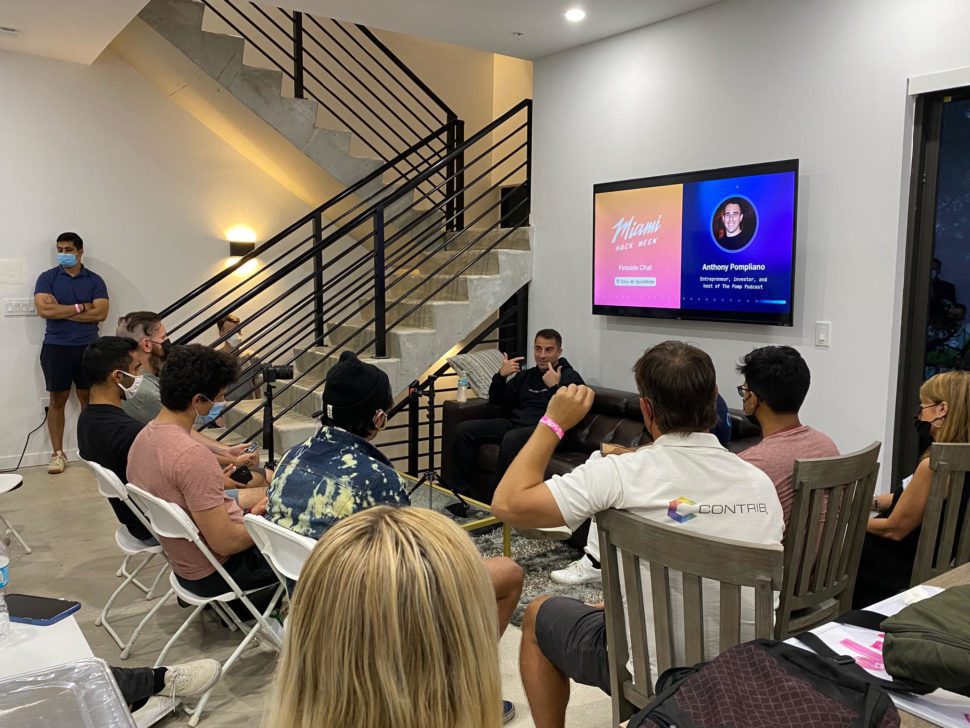 Post-event, Shah shared a few notable projects featured at the QuickNode house during the week including:

“We just spent the last week building a high precision cosmetology robot and an automated farming biosphere from scratch! It’s so cool to be able to work alongside mechanical engineers, electrical engineers, data scientists, software engineers, roboticists, biomedical engineers, etc., and I think it’s important to show people that we’re able to do all that in Miami. That’s the takeaway I want folks to have, and I think the word is spreading quickly.”

Jokingly described as “the most bougie house of Miami Hack Week” was the 305 Dragon House, a gorgeous mansion on the Venetian Islands sponsored by the teams at 305 Ventures and Dragon Global.

“305 Ventures was amazed by the quality of the talent and companies created this week” said Zaid Rahman of 305 Ventures. “We tried to create an ambience at the 305 Dragon House that encouraged engineers to start companies and recruit co-founders — and it worked! In the coming weeks, we will be backing some of the projects started this week. We will keep investing in the Miami talent ecosystem through our simple strategy of bringing the best talent together.”

One team that came out of the 305 Dragon House was 4th Wall AI (pictured at top of this post), where they set out to build digital humans that would create better engagement and increased conversions between brand owners and content creators and their fans/customers. Anna Gandrabura, a member of the 10-person 4th Wall AI team, sees multiple applications for this technology – from replicating the in-store experience for customers online, to creating interactive avatars for gaming but as an EdTech startup founder, what most excites her is the implications it can have in online education space.

While hackathons are notoriously male-dominated, Miami Hack Week had a strong contingency of women participating. Projects ranged from water sensors with the ability for home owners to sell their data back to government entities, to an all Black women technical team combating food insecurity by volunteering their time — and their hack project — to benefit The Buddy System.   (You can donate to the nonprofit here,)

Ariana Waller, founder of Wallway Technologies and a full stack developer,  moved here in April after completing On Deck. Her team members are all first-gen Haitian Miamians: Fania Celesin is director of programming for Buddy System MIA,  Nirva Boursiquot is an aerospace engineer and founder of Silk Roads, and Whitney Lubin is a full-stack developer and founder of Haitians in Tech.

One of Buddy System’s major issues was unfortunate food waste because there wasn’t a good way for families, volunteers and staff to communicate about what was available in the community refrigerators at any particular time. “We created a digital portal for family members to be able to reach out to the volunteers to ask questions and get updates on when food will be dropped off,” Ariana said. “We redid her entire web platform.” And the team was strong in their Twitter promotion.

This team hopped around. Most of the time they hacked in the BackEnd Oasis but also worked from the Blackdove House as well, Ariana said, “That’s the beauty of this experience – people from all over the world from different backgrounds coming together to just build stuff, regardless of what barriers we face in life.” 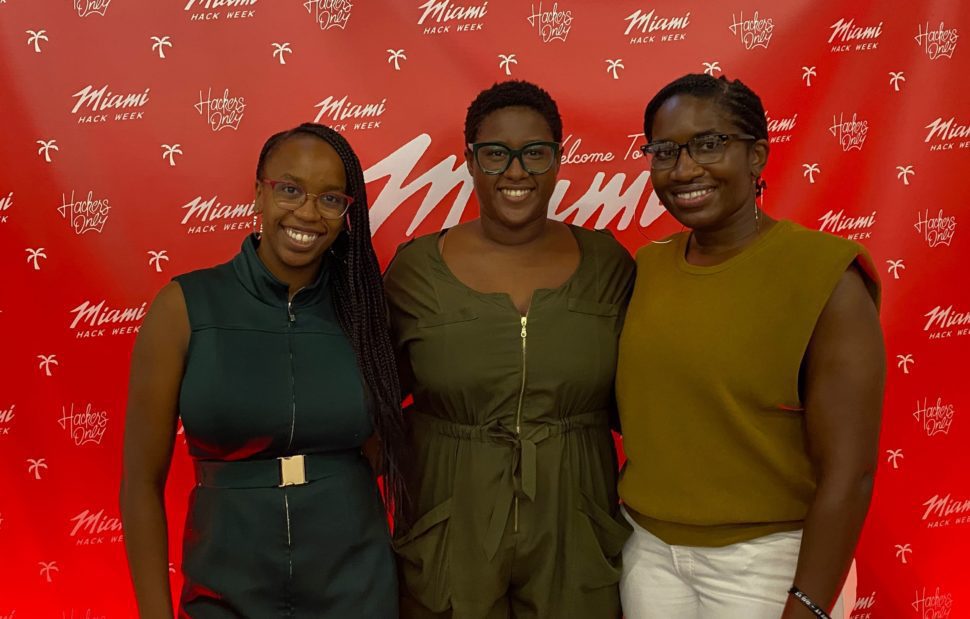 The group gathered at the Hard Tech House spent the week building a high precision cosmetology robot and an automated farming biosphere from scratch, reports Channing Pear, founder of the new Hard Tech Miami group. “It’s so cool to be able to work alongside mechanical engineers, electrical engineers, data scientists, software engineers, roboticists, biomedical engineers, etc., and I think it’s important to show people that we’re able to do all that in Miami. That’s the takeaway I want folks to have, and I think the word is spreading quickly.”

In all, about  500 techies participated in the first Miami Hack Week, with some of them flying in for the week and checking out the tech scene while they are here. Despite all the events and parties throughout the week, more than 50 teams came together to compete in the Expo on Friday for cash and prizes valued at $40K. 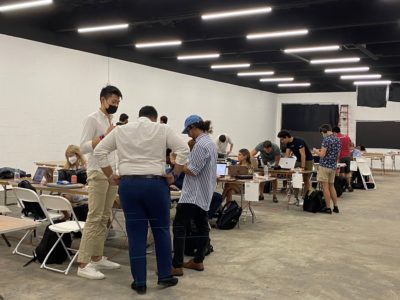 It's a full house at the Miami Hack Week closing ceremony! It's been a phenomenal week – and now our hackers get to show off their creations..#MiamiHackWeek pic.twitter.com/BCUJbkTrp5

Gandrabura hopes more women will participate. “I spoke to so many women that mistakenly thought they had to be an engineer to get involved but what is really needed are team members that bring different skill sets like product managers and designers. We need to make sure that message gets to these women.”

Under a rock and have no idea what this is all about? Read our earlier explainer and coverage of Miami Hack Week: This August, Miami plans to hack its way to engineering fame

Maria Derchi Russo
Executive Director at Refresh Miami
Maria Derchi Russo is the Executive Director of Refresh Miami, and Director of Community for Florida Funders, a hybrid venture capital fund & angel network. She is also the founder of Women in Miami Tech, a group dedicated to supporting and advancing women in technology in South Florida. A Miami-native, Maria is passionate about all things #MiamiTech.