Why is South Florida becoming a hub for FinTech?

Just last week, migrant-focused Swedish mobile banking app MAJORITY cut the ribbon on its new office and community center in Little Havana. This is the most recent example of a broader phenomenon that has emerged over the last few months.

From New York startup Bank Novo to Hispanic consumer-focused challenger bank Fortú and the former CEO of PayPal’s new consumer banking venture, technologists from across the country – and the hemisphere – are moving to make Miami their new home.

This is more of an accelerating trend rather than a new one. FinTech startups and scaleups like Visa-acquired YellowPepper, NovoPayment, Finconecta, and Milo are already experiencing the advantages that come with being based in South Florida.

Consider these three reasons why early-adopting FinTech wizards are increasingly bullish on our region: cryptocurrency, Latin America, and the challenger mentality.

South Florida is poised to reap the benefits of cryptocurrencies becoming less of a meme and more of a viable alternative to fiat currencies. Miami’s laser-eyed mayor, Francis Suarez, has especially embraced the crypto community. “The City of Miami believes in #Bitcoin and I’m working day and night to turn Miami into a hub for crypto innovation,” he said in a tweet.

The City of Miami believes in #Bitcoin and I’m working day and night to turn Miami into a hub for crypto innovation.

Apart from symbolic moves like uploading the Bitcoin white paper to the city government’s website, Miami is already reaping tangible rewards from Mayor Suarez’s crypto savvy. Cryptocurrency exchange FTX has secured naming rights for AmericanAirlines arena in a deal that is expected to bring Miami-Dade County an estimated $90 million over 19 years.

The mayor also stepped in to help make Bitcoin 2021 a reality. Later this week at Mana Wynwood, Miami will host this year’s Bitcoin conference, which its organizers report will be “the biggest Bitcoin event in history.” The event is expected to bring tens of thousands to the city, and taking a page from the Art Basel playbook, multiple satellite talks  and events are planned. 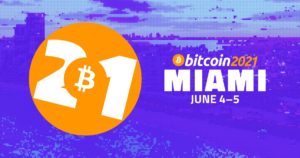 Perhaps most significant are Mayor Suarez’s and Miami-Dade County Commissioner Danielle Cohen Higgins’s moves to potentially accept tax payments in Bitcoin and to enable municipal workers to receive part of their paycheck in Bitcoin. This increases the currency’s usefulness as a medium of exchange, combatting a criticism from those who see crypto as a vanity asset.

In an article for CoinDesk, Jeff Wilser said that “it’s tough to overstate the role of art in Miami’s crypto scene.” When Art Basel was cancelled last year, he argued that “crypto filled the void,” with digital art being sold through blockchain-based non-fungible tokens.

Diamond-handed HODL-ers might want to hold their horses, however. The legal case State of Florida v. Espinoza has determined that selling Bitcoin for cash is considered transmitting money, which in some cases requires costly licenses. That’s a far cry from Wyoming, which has been heralded as the “promised land” for crypto investors.

Legal issues aside, perhaps the only certainty about cryptocurrencies is that it’s all about the hype – something there’s no shortage of in the South Florida tech scene.

Bridge to (and from) Latin America

With Spanish, Portuguese and Creole comfortably coexisting alongside English in Florida’s most multicultural region, it’s far from a stretch to see Miami as the portal to Latin America. On top of South Florida’s deep cultural ties to Latin America, the Greater Miami area benefits from having three international airports offering direct flights to all major destinations in Latin America and the Caribbean.

Of course, all that is nothing new. But it’s increasingly relevant for FinTech.

Even though 78% of Latin Americans are expected to have a smartphone by 2025, 70% are currently under-banked. That means that despite an increasing uptake in mobile technology, the majority of Latin American consumers do not have access to basic banking services such as credit cards and loans. While some FinTech companies like Brazilian behemoth Nubank have stepped in to modernize the space, there is still much work to be done to move away from the long lines and predatory products that plague Latin American consumer banking.

Enter Miami. Felice Gorordo, the CEO of eMerge Americas, has described the city as an ideal location for Latin Americans to come together on neutral ground. Miami’s reputation as a multicultural epicenter lacks the historical baggage accompanying many Latin American nations. “It has been easier to get a Colombian to come to Miami than to São Paulo,” said Gorordo.

When it comes to funding, South Florida acts as a natural interlocutor between the American finance and VC ecosystem and the Latin American market. As investors and CEOs begin to see South Florida as more than just a luxury vacation destination, major financial firms are planting flags all over the region. Softbank is leading the charge, with its Miami office at the helm of its Latin America-focused investment fund. Let’s also not forget the opportunity that startups like Fortú see in the US-based Hispanic market for financial products. Its fully bilingual banking app makes it easy to send money abroad.

South Florida’s challenger mentality is a less tangible but perhaps the most potent advantage for FinTech.

In an economy where the consumer comes first, banks are sorely lagging behind. From excessive fees to blatant fraud, the legacy providers of banking services in the US have a far from sterling reputation.

Challenger banks have spotted the gap between consumers’ expectations and the legacy providers’ offerings, developing products that flip the script on traditional banking.

This shift is already happening. Earlier this year, New York-based bank Novo, which offers businesses low- and no-fee banking services, announced its decision to open an office in Miami. Co-Founder and CEO Michael Rangel said that he feels comfortable building his “industry-defining business” in South Florida as investors have begun to see the region’s value.

Bill Harris, the former CEO of Paypal, has also chosen Miami as the headquarters for his forward-thinking digital bank, Nirvana. The startup aims to offer a credit card that nudges consumers to make financial decisions that increase their wellbeing – a far cry from the traditional banking model.

MAJORITY, a challenger bank that offers services tailored to migrants, has also set up shop in Miami. For a paltry $5 a month, the Swedish startup provides a feature-packed, FDIC-insured checking account. MAJORITY is taking the neo-banking experience a step further by creating a community center in Miami’s Little Havana neighborhood. The space will serve as a physical nexus connecting locals from around the world and promoting financial literacy. In a statement, MAJORITY highlighted the neighborhood’s diversity – home to Cuban immigrants as well as Miamians from across Central and South America.

Why South Florida? Success in this industry will require startups to combat powerful incumbents. In Miami, where more than half of residents were born outside of the US, there is no lack of idealism and determination. The city itself might be classified as a ‘challenger,’ having taken advantage of the uncertainties and disruptions stemming from the pandemic to cultivate a welcoming environment for innovation.

Grit may be hard to quantify, but it’s a palpable sensation felt all along the I-95 corridor, putting South Florida in a strong position for using tech to challenge the financial status quo.

A long road ahead

The reality is that South Florida is far from a global FinTech hub. In terms of any metric – number of startups, total investment, deal volume – it pales in comparison to cities like New York, San Francisco, and London. It still falls short when compared more realistically with cities such as Boston, Atlanta, and São Paulo.

Equally, South Florida’s FinTech success is deeply intertwined with factors that are undeniably unpredictable. For instance, Bitcoin suffers from extreme volatility. Nobel Prize-winning economist Paul Krugman, whose views broadly represent those of other critics, sees the cryptocurrency somewhere between irrelevant “technobabble” and malicious “Libertarian derp.” Latin America was ravaged by the Covid-19 pandemic and its recovery is uncertain at best. And the entrepreneurial, multicultural spirit that has powered South Florida’s growth as a tech hub is threatened by soaring real estate prices and pernicious inequality.

However, there is clear momentum toward the growth of South Florida FinTech. By number of deals and dollars in 2020, FinTech was the second-strongest sector in the Miami metro area (HealthTech came out on top). And recent success stories, such as Pipe’s recent $250M strategic equity fundraise, are a positive indicator that the region is heading in the right direction.

Ultimately, this is a story of possibility and opportunity. That may be just enough to fuel South Florida’s FinTech success for years to come.